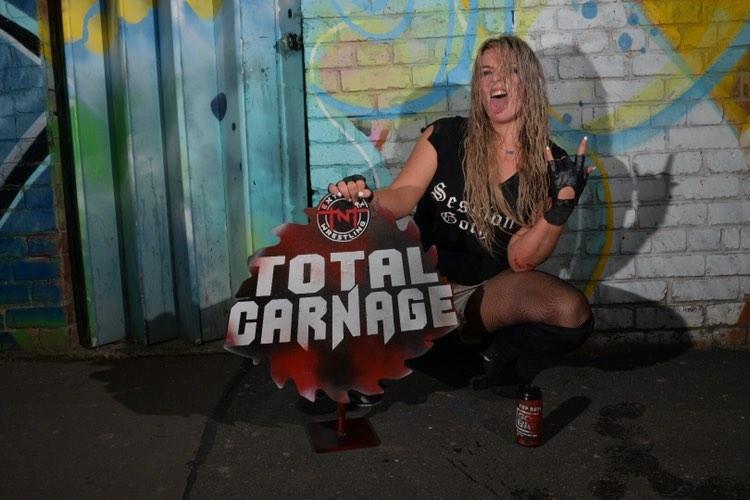 Next:
Wrestle Carnival Bring Big Top Grandeur Back To BritWres This Weekend

It’s fair to say that TNT Extreme Wrestling made up for lost time with their live return in front of fans, last week.

The Liverpool based promotion ran back-to-back-to-back shows at their home ground of Hangar 34 and Fusion nightclub, and kicked things off in typically barbaric fashion with their first ever all women’s death match tournament, aptly titled Total Carnage.

The eight woman bloodbath was contested by Session Moth Martina, Kira Chimera, Kasey Owens, Alexxis Falcon, Emersyn Jane, Raven Creed, Molly Spartan and Gia Adams, with Session Moth (or Session Goth as she was known for the night) grinding her way to victory after enduring a Lego deathmatch, a barbed wire and chairs bout and a final Extreme Deathmatch against eventual runner up Owens.

And as if making history with the UK’s first ever all women’s deathmatch tournament wasn’t enough, TNT cracked on the next night with Siren’s Fury, another all female affair, which almost took the roof off Hangar 34, with a Falls Count Anywhere headline bout between hometown girl Lizzy Evo and Alexxis Falcon almost bringing the venue crumbling to it’s foundations, as Evo emerged victorious, leaving with the Women’s Championship.

Elsewhere on the card, Session Moth made her second appearance of the weekend, securing yet another victory, this time over the wonderfully talented Heidi Katrina, while Lana Austin saw off Molly Spartan. The semi-main, a tag team match, was hotly contested between Pretty Little Killers Ivy and Ruby Radley and the team of Taonga and Gia Adams, with the Killers coming up trumps this time round in an intense battle.

To cap off a perfect return weekend, Ignition: Outrage emanated from Fusion and the six match card did not disappoint.

Sonar Durson retained the Ignition Championship after a typically chaotic war with Tom Thelwell, as the undercard saw Scott Oberman see off Gene Munny, Chase Alexander get one over on Nico Angelo, Leyton Buzzard defeat Man Like Dereiss and Brian Aidenson score a victory over Isaac North in the VIP match.

The main event was reserved for the IGNition Rumble, which, as you can probably imagine, was a fierce competition, with Kameron Solas reigning supreme at the end of the night, setting up much bigger things for him further down the line.

As if all that wasn’t enough, there’s still a ton of TNT shows lined up in the very near future which all promise to be equally, if not more jaw droppingly psychotic.

A double whammy on August Bank Holiday weekend is looking particularly special, as Summer Explosion kicks off the weekend’s festivities on 28th, followed by All Eyes On Me the following day. Tickets for both shows, as always, are available through our very own ticketing site WT LIVE
The buzz coming out of the return weekend was unlike anything TNT has experienced in their short yet storied history, which is saying something when you consider the talent that has come through the company in the last few years, such as PAC, Pentagon, Mark Haskins, El Phantasmo and many, many more.

With Britwres taking a severe battering in recent years, it felt refreshing and inspiring to see so many ludicrously talented female talents step up and set the bar ludicrously high for all future events. And you can bet they’re going to continue smashing glass ceilings at every TNT show in the future.