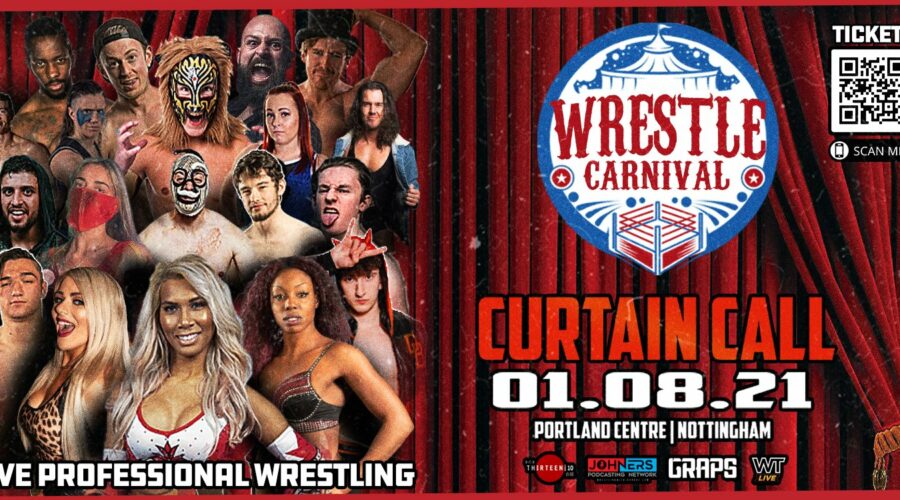 Next:
WWE SummerSlam 2021: How To Watch, Start Time, Match Card

The world of professional wrestling has often been compared, both positively and negatively, to a travelling circus. A mesmeric variety show full of the weird and wonderful, of acrobats and strongmen performing feats that have to be seen to be believed. And this Sunday in Nottingham, you really won’t want to miss out on witnessing the Curtain Call of Wrestle Carnival.

Coming to the Portland Centre in the Meadows in Nottingham, promoter Gary Ward has put together a supremely stacked card of talent to kick off a new era in British Wrestling, as BritWres attempts to traverse the embryonic stages of a post-pandemic world, with live shows now allowed to be attended by capacity crowds for the first time in over a year.

North of 200 fans are expected to be in attendance for Sunday’s show, which will see the ever impressive Gisele Shaw continue her meteoric rise towards superstardom as she takes on cult legend and grinding enthusiast Session Moth Martina, fresh off her triumphant, historic victory in TNT’s Total Carnage deathmatch tournament on Friday night, in which she saw off three challengers en route to lifting the trophy.

Elsewhere on the card, Jay Joshua will be looking to cause an upset over the brutal Chris Ridgeway in a submissions match while Callum Newman, Joe Lando, Maverick Mayhew and Danny Black do battle in what is sure to be a bout of high flying, jaw dropping excellence.

Meanwhile, Charlie Sterling and Brady Phillips are sure to put on a purely technical showpiece, with Elijah and Warren Banks almost certain to do their best to have everyone talking about their bout on the way home from the show.

And of course, how could we forget THAT four-way match between Lizzy Evo, Ivy, Heidi Katrina and Skye Smitson which will not only be a fabulous showcase of Wrestle Carnival’s Women’s Division but also the match that determine’s the next CATCH Pro Wrestling Women’s Champion.

We cannot wait to see how the entire show pans out and likewise, cannot wait to see what else is in store in Wrestle Carnival’s future, with their Carnival of Honor coming to Nottingham on 12th September, in conjunction with Ring of Honor before Showboat on 24th October and The Golden Carnival on 14th November.

Only a handful of tickets are left for Sunday’s show, with doors opening at midday and bell time at 1pm. Tickets for that and all of Wrestle Carnival’s shows can be purchased through WT LIVE.

So roll up, roll up, ladies and gentlemen, because you’re about to witness the beginning of something very special…