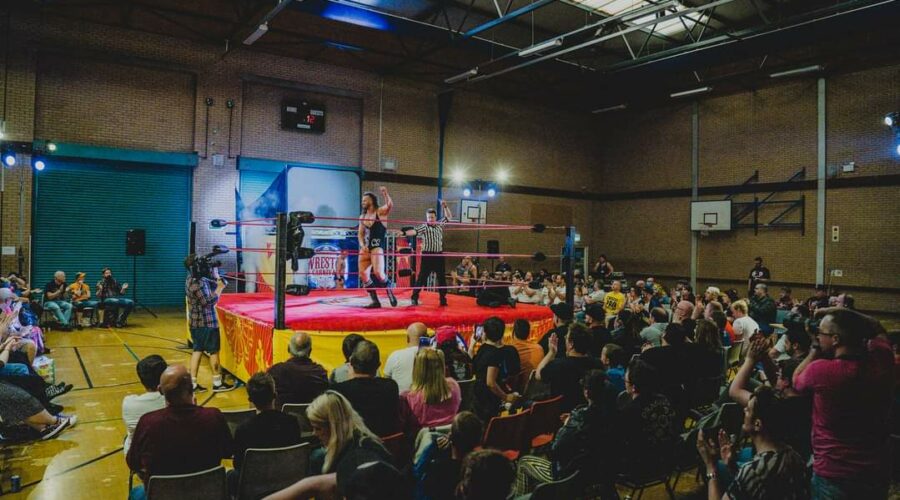 Next:
TNT Extreme Wrestling Booms Back Into Life

If you’ve been following WT’s social channels over the last few weeks, you’ll be very aware that we have been extremely excited about Wrestle Carnival.

And as last weekend proved, we have been excited for very good reason.

Among the highlights were Lizzy Evo retaining her CATCH Women’s Championship in a four-way bout against Chantal Jordan, Ivy and Skye Smitson, while Gisele Shaw put away Heidi Katrina in consecutive falls to emerge victorious from their 2-out-of-3-falls match.

Elsewhere, Big Guns Joe continued his ascent to Britwres’ top table with an impressive gauntlet victory over Hari Singh, Jerry Bakewell, Lion Kid, Mr. Charles Crowley and Terry Isit. And let’s not forget Chris Ridgeway cementing his legacy as one of the UK’s finest with a submission win over Jay Joshua.

Joe Lando was another show stealer with his victory at the expense of Callum Newman, Danny Black and Maverick Mayhew, with Warren Banks picking up a W against ELIJAH and the always impressive Charlie Sterling defeated Brady Phillips.

And the enormity of the day wasn’t lost on Wrestle Carnival owner Gary Ward, who spoke exclusively to Wrestling Travel in the aftermath of the event.

“After nearly 18 months it was so good to just be at a live event, but even more sweet knowing it was Wrestle Carnival’s fist show. I loved just seeing people smile, laugh and enjoy wrestling again, in fact seeing people forget about the last 18 months for a few hours was something I’ll not forget, I think we’ve all taken things for granted, but never again.

“Everyone backstage was just amazing to be around, for a lot of us this was the first show or infact first time being around so many people again, a new team, new opportunities and new beginnings for us all, we’re all so very grateful for the support on Sunday and since online.

“We can’t wait to do it all again in September “

Ah yes, September. When Wrestle Carnival tag with Ring of Honor to lay on their Carnival of Honor at the Portland Centre in Nottingham. Come 12th September, there won’t be an empty seat in the house, with tickets flying fast for an already stacked card that contains such can’t miss action such as the legendary Doug Williams going head-to-head with Dean Allmark in a ‘Pure Rules’ match, as well as superstar-in-the-making Gisele Shaw doing battle with Kasey Owens, Chris Ridgeway returning for another submission bout, this time with Carlos Romo as his opponent and the one-and-only Joe Hendry tackling Leyton Buzzard.

Tickets for the show are available through Wrestling Travel Live but will need to be snapped up rapidly. There will be no HBK at SummerSlam ’05 overselling with these bad boys. Get ’em before they’re gone.