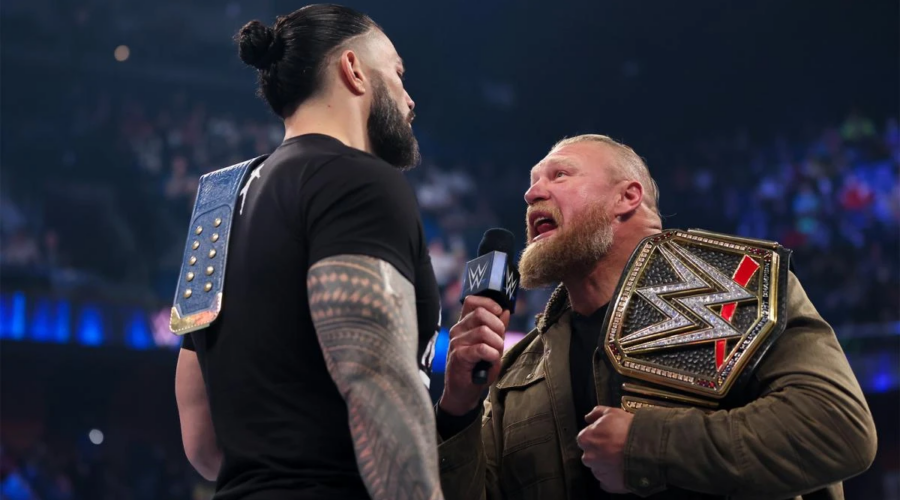 Next:
The Road To WrestleMania 38: Who Is Making The Marquee In Dallas?

If WrestleMania is Christmas Day on the Sports Entertainment calendar, then the Royal Rumble is, not quite Thanksgiving, but certainly Halloween (apologies Halloween Havoc. I know you’re literally a Halloween event, but just hear me out with where this analogy is going).

Much like the main event of Spooky SZN, the Rumble is a major event generating a ton of interest and old characters from the past being dug up for a shocking appearance. It also falls a couple of months before the grandaddy and kickstarts the excitement for the Big Day (or Days, in the case of ‘Mania 38).

This year, on the men’s side of the equation, there’s added intrigue with both World Champions having unfinished business with one another, following Brock Lesnar’s unexpected WWE Title victory at Day One. Now, rumours are swirling that suggest a Winner Take All situation could arise for ‘Mania, with Lesnar and Universal Champion Roman Reigns yet to settle the score that was originally slated for Day One, only to be postponed due to Reigns’ Covid-19 diagnosis.

However, this would likely mean, were it to occur, that the winner of the Rumble match would not go onto challenge for a title of their choosing at WrestleMania 38 in Dallas at the beginning of April, but rather at a service station on the road to WrestleMania.

Unless of course one of Reigns or Lesnar was to enter the Rumble themselves, following a successful title defence, and win the whole thing. Who knows? Stranger things have happened. Then again, celebrity entrant Johnny Knoxville could dump 29 other blokes over the top rope and head to ‘Mania, win both titles, unify them and then immediately retire. Actually, that’s exactly what we want to happen. Book that NOW.

So, with just over two weeks remaining before WWE’s second biggest show of the year, what should we be expecting from Royal Rumble 2022?

Royal Rumble 2022 will be taking place on Sunday 30th January

First things first, before bell time on the main card, the official Royal Rumble 2022 pre-show will be available on the WWE Network (Peacock if you’re in the US), WWE.com, the WWE app, Twitter, Facebook, YouTube and Twitch at 12am.

WHAT MATCHES ARE ON THE ROYAL RUMBLE 2022 CARD?

We’re just over a fortnight away from the big show emanating from The Dome at America’s Center, St.Louis and the card is now beginning to take shape and look a lot closer to being finalised.

Ahead of the Rumble, why not take a look at who we think could be on the marquee for ‘Mania 38 in Dallas this year? Then maybe see how the upcoming Rumble jives with our predictions for 2022 (just ignore the Kevin Owens one, pls. It was written before he re-signed and ruined our whole headline prediction. Typical heel).