Previous:
The Road To WrestleMania 38: Who Is Making The Marquee In Dallas? 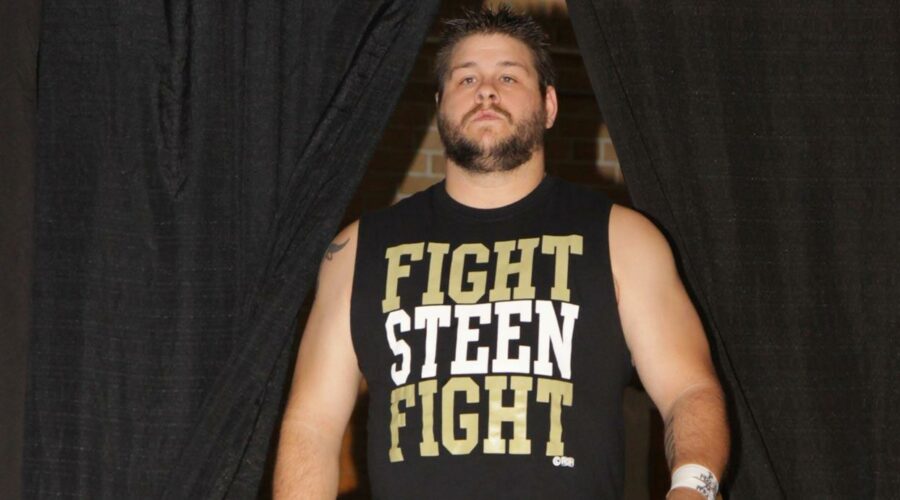 Next:
WWE's Survivor Series Brand Supremacy Angle: Does It Need To Change?

It feels as though the dawning of every new year brings with it the same review of the 12 months that just preceded it – “Well, that was f**king weird”.

Indeed, with an empty Performance Center WrestleMania, cinematic matches galore and the debut of the ‘ThunderDome’, 2020 felt like it would be impossible to top for downright weirdness.

A hangover from 2020, Bray Wyatt’s Fiend returned after being burned alive, with full ‘horror movie monster that just won’t die’ makeover, only to revert back to his usual attire for his WrestleMania showdown with Randy Orton. Which he promptly lost inside a few minutes via RKO because Alexa Bliss transformed into an ink oozing cyber punk witch, sat atop a giant jack-in-a-box. Just re-read that last sentence. That alone is probably enough to win 2021 as weirdest wrestling year ever, isn’t it? Especially when you consider Wyatt was released only a few months later, having not appeared on WWE television since his ‘Mania loss in Tampa.

Also in a prominent position on that Tampa card, and then again on the following PPV, was The Titan…sorry, I mean Braun Strowman, who dealt pretty handily with Shane McMahon inside at a steel cage at the Showcase of The Immortals, before coming up short in a triple threat WWE Title match against then champion Bobby Lashley and Drew McIntyre. A couple of weeks later and Strowman was also released. Now he’s appearing on ROH’s final show before their entire roster leaves for pastures new and he’s repackaged as The Titan, standing alongside real life best friend EC3 at Final Battle this past week.

There were roughly another 560 releases on top of the Strowman and Wyatt deals, including the firing and almost immediate rehiring of Samoa Joe, who then won then showed up back in NXT to win the top title on the black and gold brand, dethroning Karrion Kross (more on him shortly) before forfeiting the title due to injury. Tommaso Ciampa would once again lift ‘Goldie’, only now he’s defending it on a technicolour ‘2.0’ version of the brand, where Rick Steiner’s son is his main challenger.

Former champion Karrion Kross, of whom so much was expected on the main roster when the call was finally made, jobbed to Jeff Hardy in his opening match on Raw, despite being undefeated on NXT until that point. He then threw down with old NXT rival Keith Lee and then Hardy once more, earned himself some pre-match Demolition style armour and was then, subsequently, released. Along with Lee and, just this past week, Hardy as well. Oh and his soon-to-be wife Scarlett Bordeaux, who was not included in Kross’ main roster promotion, for reasons still unknown.

That’s a whole bunch to take in, isn’t it?

Oh and, yeah, CM Punk returned to wrestling after almost eight years away. Almost forgot about that one. And, oh yeah, Daniel Bryan is now Bryan Danielson again and is tearing it up in AEW. Good, nearly missed that o….and Adam Cole is back with The Elite. And Andrade and Aleister (Malakai) Black are also under Tony Khan’s employ.

Ah, and Brock Lesnar has a ponytail now too.

What should we be expecting in the world of pro wrestling in 2022?

Well, here are a few (not that well) educated guesses…

Kevin Steen Will Become All Elite

Now, granted, this is hardly a blockbuster prediction to come flying out of the gates with, but it’s probably going to happen and it will be huge for AEW when it does.

The current Kevin Owens, if reports are to be believed, only has a couple of months remaining on his WWE contract and, as of yet, has not signed an extension. So although his involvement in a main event, WWE Title feud may suggest that Vince McMahon is high on KO, let’s remember the time and effort that was being dedicated to so many others before they parted ways with the ‘E.

Owens will, in all likelihood, be the fall guy in the Day One WWE Title match on New Year’s Day, so Seth Rollins and Bobby Lashley can lose without losing and reigning, defending champion Big E can claim another high level notch on the road to WrestleMania.

Over in Jacksonville meanwhile, Owens’ old friends The Young Bucks and Adam Cole are producing magic on a weekly basis and would likely welcome the artist formerly known as Kevin Steen with open arms, allowing him to work a whole host of dream matches that are ready and waiting for the former Universal Champion in AEW, as well as presenting him with a much lighter work schedule to allow him to spend more time with his family. A win-win situation, it must be said.

And who knows, a few more high profile names may just be joining him…

The Undertaker Will Go Into The WWE Hall of Fame

This one feels like an open goal of a prediction, to be honest. Perhaps even mores than the Kevin Steen is All Elite one above.

The Deadman had to endure a retirement ceremony in the ThunderDome of all places, last year at Survivor Series – an event which celebrated his 30 years with the company. Yet, even with the Paul Bearer hologram, the sight of one of WWE’s most legendary, highly revered characters having to say his goodbyes in front of a load of LED screens rather than a packed house, was pretty underwhelming.

Fast forward just over a year though, and we’re not far off a WrestleMania in Dallas. A retired ‘Taker’s backyard, his home state, is ideal for the ultimate send off. Especially when WWE have two nights at the 100,000+ capacity AT&T Stadium to sell out. A ‘Taker Hall of Fame induction will be the sort of WrestleMania moment Vince McMahon craves. It wouldn’t even be that surprising to see the induction happen at ‘Mania itself.

When it comes to pro wrestling predictions for 2022, this has to be the safest bet of all when it comes to happenings within WWE. The only question that remains is who inducts Mean Mark? Kane seems like an obvious choice, but Triple H, HBK and Steve Austin could all have very legitimate claims to being the most suitable candidate. As could Mick Foley.

The NXT Title is probably in the former Rex Steiner’s very near future, but not much further down the line than that is almost certainly WWE or Universal gold. The second generation focal point of the new NXT 2.0 feels like he’s having the proverbial rocket strapped to his back, even if he was unsuccessful in his first attempt at securing the bag against Ciampa at Halloween Havoc.

With Vince and Bruce Pritchard having a much bigger hand in the new era of NXT, a prospect like Breakker, with his lineage in the business, a look that looks great on an 8×10 and a huge amount of athletic ability and charisma, is a shoo in for a rapid-fire push. Add to this the fact Vince will be desperate to make NXT 2.0 feel like a brand that can produce instant world champions (of his own creation) so more people hopefully pay attention to it, then Breakker could be the one to unseat a certain Head of The Table, next year.

AEW Will Announce And Sell Out A Major Stadium Show

Were it not for Covid, this would have likely already happened in 2021, such was the surge in AEW’s popularity over the last 12 months. The arrivals of CM Punk and Bryan Danielson have sent Tony Khan’s Jacksonville based promotion into another orbit, circulating much, much closer to the lads up in Stamford, Connecticut.

Of course, the Arthur Ashe Stadium in Queens, New York was technically a ‘stadium show’ when AEW ran Grand Slam over the summer, but we’re talking something more in the ballpark of 50,000 fans in attendance or above.

Television ratings have been solidly improving in 2021, with All Elite regularly hitting above a million viewers for Dynamite. On top of that there’s Rampage being added into the weekly rotation, some very strong business in the New York market – WWE’s backyard and a ton of crossover media coverage. And, y’know, Hook being the most money prospect in the history of the business for his Action Bronson scored entrance alone.

All this positivity surely has to culminate in Tony Khan taking the next logical step (UK tour aside, obviously) in building AEW’s brand even further. And while perception isn’t always necessarily reality, the sight of All Elite drawing over 50,000 people to a venue usually reserved for an NFL franchise will certainly make even more people stand up and take notice of what’s going on down in Jacksonville.

This one may feel like quite a bit of a stretch when compared to the other pro wrestling predictions for 2022, but an Eddie Kingston title victory, no matter how brief his reign may be, would be one of the greatest stories AEW could ever tell.

Absolutely everything Kingston turns his hand to becomes gold, instantly. His promos are unsurpassed in the modern era and every bout he’s in feels like a life or death fight that you simply cannot miss.

Kingston’s work with Jon Moxley, The Young Bucks, Miro and most recently his absolute barnburners with Bryan Danielson and CM Punk are proof that he has all the attributes for the biggest stage with the biggest stars and, most importantly, can generate an emotional response from the audience unlike anybody else.

The man known as ‘Mad King’ has made himself unmissable ever since stepping foot in AEW to throw down with then TNT Champion Cody Rhodes. Here is someone who just before that match was ready to leave the business he loved forever. Like his incredible Player’s Tribune article said, ‘Eddie Kingston Got F**king No Business Being Here’. Yet here he is, thriving, inspiring and feeling like a fairytale unfolding in front of our very eyes.

Mick Foley’s accumulative time as WWE Champion across his three reigns with the big gold eagle only amassed to 47 days. Yet no one really remembers the reigns for being short, they just remember THAT moment, when Steve Austin assisted Mrs. Foley’s baby boy against The Rock and the Corporation on that episode of Monday Night Raw to become the world champion. And that’s what everyone would have ingrained into their memories forever were Kingston to reach the top of the mountain.

Hangman Page’s journey to the top was emotional and meticulously crafted. Executed perfectly. But imagine the extra emotion behind a shock Eddie Kingston world title victory. The love for Kingston in the stands and in the locker room would guarantee this as a GOAT level moment in the history of the business and it has to be something that is surely on Tony Khan’s radar for 2022.

And don’t be surprised if…

As far as pro wrestling predictions for 2022 go, let’s face it, anything could actually happen, especially if the last two years have taught us anything.

What do you make of our pro wrestling predictions for 2022? What about your own for the year ahead? Let us know in our comments sections and replies on Facebook and Twitter. And we’ll see you in 2022.