Previous:
25 Years of The Rock 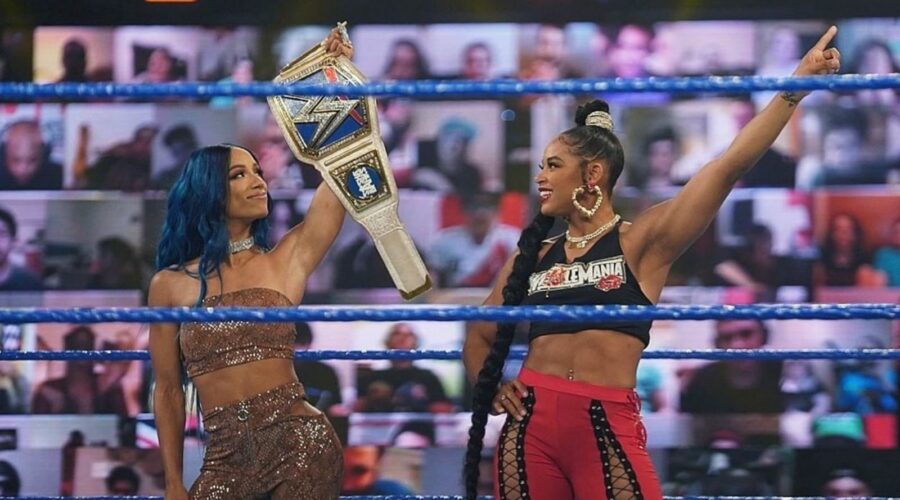 Next:
Warrior Wrestling Is About To Have The Most Super Sweet Sixteen Of All Time

As another year starts to draw to a close, we can once again look back on another 12 month stretch where the women’s divisions of every promotion in the world have stolen the show.

Bianca Bel Air and Sasha Banks made history at WrestleMania with one of the greatest, most important matches in WWE history, Britt Baker cemented her place as one of AEW’s top stars while Thunder Rosa worked absolutely everywhere, pulling out non-stop bangers with everyone she faced.

Elsewhere, Mickie James got her much deserved flowers in NWA at their EmPowerrr event before dethroning the superb Deonna Purrazzo as Impact Knockouts Champion at Bound For Glory this past week. At that very same event, the former Iiconics, Cassie Lee and Jessica McKay, now known as The Iinspiration made their long awaited return to the squared circle, becoming Knockout Tag Team Champions in the process, while Jordynne Grace won the inaugural Digital Media Championship in an inter gender six-way bout on the same night.

Nikki Cross was repackaged as Nikki A.S.H (Almost Super Hero), initially to the chagrin of a section of fans. However, once the Glasgow native nicked off with the Money In The Bank briefcase before stunning Charlotte Flair to become Raw Women’s Champion, the former Sanity star gained a much more appreciative fanbase. And although her reign as champ was short lived, A.S.H finds herself as one half of the Women’s Tag Team Champions alongside unlikely partner Rhea Ripley, herself coming off a similarly short lived reign atop the Raw Women’s division, which came after her emotionally charged victory over Asuka at WrestleMania 37.

In Japan, it was a banner year for Stardom trio Utami Hayashishita, Syuri and Tam Nakano, with former Stardom ace Io Shirai continuing to dazzle audiences in the US with her ever impressive NXT run.

With all this and much, much more occurring over the past year such as Becky Lynch’s SummerSlam return and unexpected (and not necessarily well received) heel turn, Zelina Vega winning the first ever Queen’s Crown tournament, Mandy Rose being repackaged in NXT and, oh yeah, RUBY SOHO TEARING THE ROOF OFF THE PLACE IN HER AEW DEBUT, the Pro Wrestling Illustrated Women’s 150 2021 list had even more eyes on it than last year’s edition.

Naturally, the list generated a ton of debate online, with Twitter back and forth’s only curtailed by more women’s division news, primarily the apparent backstage bust up over the ill fated ‘Title Exchange’ between Becky Lynch and Charlotte Flair on SmackDown last Friday, which, if reports are to be believed, ended with Flair being escorted from the building by security.

Just one day earlier, Lynch had successfully defended her SmackDown Women’s Title in a triple threat match against Sasha Banks and Bianca Belair at Crown Jewel in Saudi Arabia.

But, rather than just talk about the Pro Wrestling Illustrated Women’s 150 2021 List, why don’t we share it in full with you right here, right now?

Oh, and if you want to check out some exclusive interviews with a few of the stars of this list, we’ve kindly hyperlinked the names that have sat down for interviews with WT for our official YouTube channel over the past year, so you can hear from the women themselves talking about their respective careers.

The sheer amount of talent on the Pro Wrestling Illustrated Women’s 150 2021 List is tremendous and signifies just how much women’s wrestling is continuing to flourish. And next year is only going to get better, with AEW introducing the new TBS Title, which will serve as the female equivalent of the TNT Title. A tournament to crown the inaugural champion began this week, with The Bunny, Red Velvet, Serena Deeb, Hikaru Shida, Penelope Ford, Ruby Soho, Anna Jay, Jamie Hayter, Kris Statlander, Nyla Rose, Jade Cargill and Thunder Rosa all taking part.

Once you’ve finished with the women’s 150, why not check out which male stars ranked where in this year’s PWI 500?