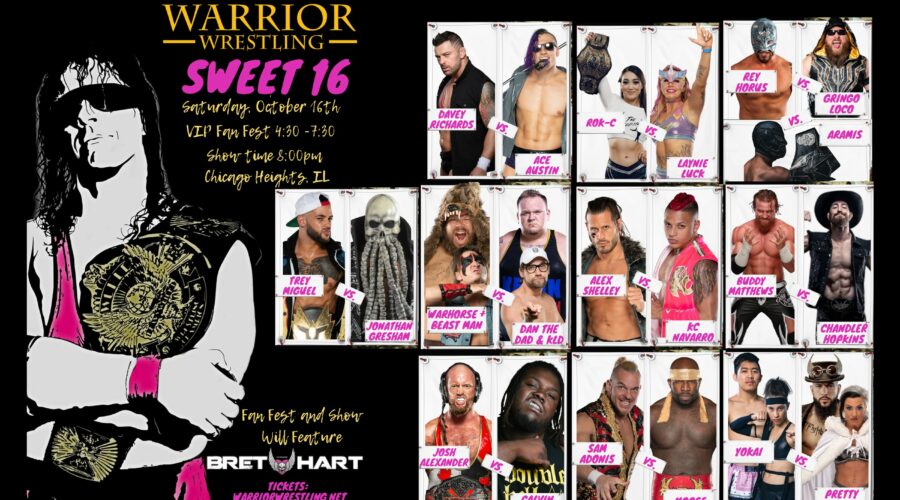 Next:
Fantasy Booking The WWE Draft

It seems insane to even suggest that a wrestling promotion could emerge from a global pandemic in even healthier shape than before, but somehow Warrior Wrestling has managed it.

The Chicago based indie was still in it’s relative infancy when the world closed down last March, having only debuted in 2018. However, with youth comes hunger, and the upstart promotion were not taking no for an answer last summer when they ran their 2020 Stadium Series out of Marian Catholic High School over three action laden weekends in September, culminating with Trey Miguel dethroning Varsity Blonde Brian Pillman Jr to win the Warrior Wrestling Title.

Since then, Warrior has continued to grow and evolve, gradually earning more and more dedicated fans thanks to each spectacular show they put on.

And this weekend, they’re about to take everything to a whole ‘nother level.

Not only is the artist formerly known as Buddy Murphy, Buddy Matthews, performing, as he takes on Chandler Hopkins, but indie legend Davey Richards is also throwing down with former two time Impact X Division Champion Ace Austin. Elsewhere on the card, current Impact X Division champ ‘Walking Weapon’ Josh Alexander fights Calvin Tankman while Rok-C faces Laynie Luck and, of course, then there’s THAT main event. Warrior Champion Trey Miguel vs Johnathan Gresham, anyone? Yes please. All of it. A million times over.

Oh, and did we mention that BRET ‘THE HITMAN’ HART IS APPEARING ON THE SHOW???

This is the company Warrior is currently keeping, right now. They can casually book the GOAT to appear at their biggest ever show.

Utilising talent from across the world, including members of the AEW, AAA, ROH and Impact locker rooms, Warrior has rapidly become one of the pandemic’s great success stories, running shows that not only generate a ton of buzz, but never fail to deliver in the ring and, most importantly, put fans first, with all relevant, Covid-era health and safety measures in place for the previously restricted shows, so the audience can enjoy a spectacular event live and in the flesh.

So, with Sweet Sixteen on the horizon this Saturday, live from 700 Ashland Avenue in Chicago Heights, Illnois, we decided to catch up with Warrior head honcho Steve Tortorello to talk all things Warrior – past, present and, most excitingly, the future.

This, of course, is not the first time Steve has shared his time with Wrestling Travel, having already sat down for one of our LockDown Sessions with fellow Midwesterner Justin Clapper a few months ago…

Now, for the rematch, we caught up with the main man once again…

Wrestling Travel: First things first, let’s discuss the appearance of Bret Hart at the upcoming Sweet 16 show. How did that happen and what can we expect from the Hitman on Saturday?

Steve Tortorello: This has been in the works for quite some time, as we’ve been talking with Bret since well before the pandemic began! With all of the restrictions and safety measures, it’s taken this long to put it together, but it’s been worth the wait! We actually got connected to Bret originally though Dave Meltzer. Bret has been on our “wish list” for quite some time, and when we surveyed our fans about who they’d really love to see, he has topped most lists! On Saturday, he will meet and talk with every fan, sign autographs, take pictures, and then make an appearance in the ring during the show itself!

WT: Do you expect the presence of Bret Hart to raise the game of everyone on the card?

ST: Absolutely! We’ve already had 5 or 6 wrestlers tell us how excited they are to just be in the arena with him, let alone wrestle in front of him. The wrestlers are total fans!

WT: How big of a challenge is it to keep topping your previous card with each show?

ST: It’s very tough! We try to book every show as if it’s our last. We don’t want to leave anything on the table. That usually results in us putting too many matches on a show, but so be it!

WT: In your past few shows, you’ve managed to book talent from a number of top promotions such as AEW, Impact and ROH, with the so called ‘forbidden doors’ seemingly being opened everywhere now. Is it becoming easier to put together indie cards with companies now apparently more willing to work with each other?

ST: Great question! We’ve always been very lucky in that we’ve gotten permission to work with most major promotions and have been able to put together dream matches that you won’t see anywhere else. We like to say that Warrior Wrestling is like a train station where different lines from all across wrestling cross over one another. AEW allows a great deal of freedom for their stars, so we’ve really benefited from that. We’ve also been very lucky to work with great talent who then went on to AEW and have maintained their relationship with us.

WT: Coming out of what is hopefully the worst of the COVID-19 pandemic, how do you rate the state of indie wrestling in the United States?

ST: I think it’s incredibly strong! It’s so great to see so many shows popping up again all over the country. For a while there in 2020, it was just us and GCW running full shows. It will be interesting to see who the new “generation” of indie standouts are now that so many of the last phase are locked up in the big leagues.

WT: For anyone who’s not experienced a Warrior Wrestling show before, what should they expect?

ST: It’s a wrestling party! We try to put on a buffet of all different types of matches, from high-flying lucha libre to great technical matches to stiff fights to entertaining characters. We believe that wrestling is best when it’s a variety show, so there should be something for everyone.

WT: What are your top five matches in Warrior Wrestling history?

ST: Wow! Great question. There are matches that I like for different reasons, and they all have significance not only because of the performance of the stars in the ring but also because of what each match meant to the actual people behind the characters and the team behind the sceneds. So, here’s my list: 1. Will Ospreay / Amazing Red / Rocky Romero vs. The Rascalz, 2. Tessa Blanchard vs. Kylie Rae, 3. Aramis vs. Daga, 4. The Luchs Brothers vs. Team White Wolf, 5. Brian Pillman Jr. vs. Warhorse

WT: Finally, where next for Warrior? Any more legends or big names lined up for future shows that you can share with us?

ST: Onward and upward! We can’t announce anything formally just yet, but I can say that we’re looking to work more closely with New Japan again in the near future and that there may be some more AEW stars coming through our doors!

New Japan and more AEW? Those so called forbidden doors are officially blown wide open at this point and Warrior are gleefully stomping right through them and scooping up all the finest talent for their increasingly stacked shows.

This Saturday promises to be very special and we cannot wait to see what craziness unfolds.