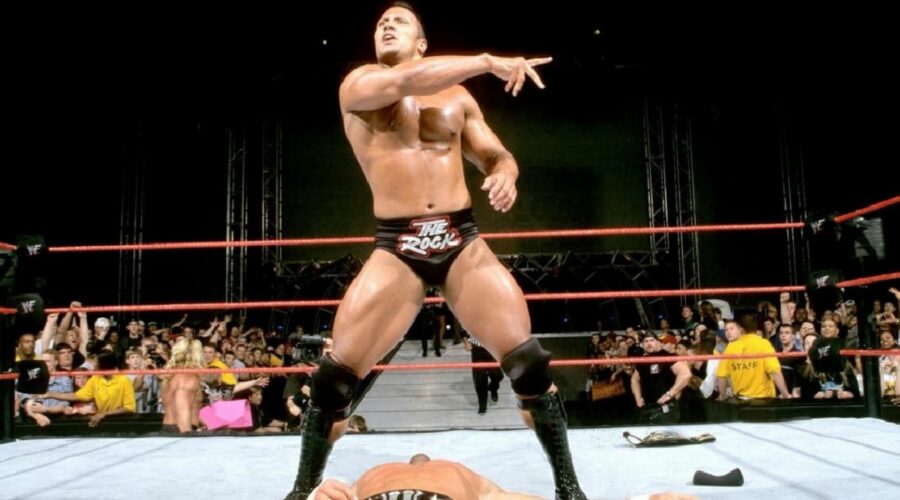 On Sunday night, WWE dedicated the lion’s share of their Survivor Series Pay-per-view to celebrating 25 years of The Rock, given that The Great One made his debut at the same event a quarter of a century ago.

It had been believed by many that, given the amount of time dedicated to celebrating 25 years of The Rock, The People’s Champion would actually show up at the Barclay’s Centre in Brooklyn, with an eye on a potential WrestleMania 38 main event against current Universal Champion and cousin Roman Reigns.

However, said appearance did not transpire, although a golden ‘Cleopatra’ egg from his recent Netflix film Red Notice was introduced to the audience by Vince McMahon, who revealed it’s worth to be $100m before it was promptly stolen, with Austin Theory being quickly revealed as the culprit last night on Raw, earning himself a WWE Title shot against Big E in the process.

While it was disappointing that Big Dwayne’s presence was not felt in Brooklyn (filming commitments have been cited as the reason for his absence in several online reports), the last week or so has seen social media timelines flooded with an innumerable deluge of his greatest hits, from the precocious ‘Blue Chipper’ debut in MSG at Survivor Series ’96 to his cocksure Nation of Domination days on to becoming the People’s Champ then Corporate Champ and back again before going Hollywood in 2003 and finally returning to vanquish John Cena and then CM Punk to once again reign as WWE Champion.

It’s almost surreal to think not only have we had 25 years of The Rock but also that the former Rocky Maivia’s ‘Once In A Lifetime’ bout with Cena is almost a decade old and that we haven’t seen him lace up his boots (discounting the six second ‘match’ against Erik Rowan at WrestleMania 32) since WrestleMania 29, where Cena took home the spoils in their WWE Title main event outing.

But here we are, nine years later almost, with rumours swirling around endlessly that the wait could soon be over and, watching and rewatching a myriad of clips and matches over the last couple of weeks, it’s difficult not to feel more than a few pangs of excitement for a potential all Samoan showdown on the Grandest Stage of ’em All next year.

With each passing foe vanquished, it feels more and more likely that The Rock will be set up as a challenger to Reigns’ crown as a way to further cement the younger Anoa’i as the face of the company for the current generation. Although Reigns’ unfinished business with Brock Lesnar could yet rear its head again in time for ‘Mania should a match with his older cousin fail to materialise.

It is hard to deny that The Rock vs Reigns would be anything other than a legitimate needle moving match, with plenty of backstory to lean on and, of course, The Rock’s natural drawing power. Handled correctly, it would absolutely be the most important programme of Reigns’ career and in terms of business, an even more important feud for WWE than Rock’s previous dalliance with Cena in 2012, which drew a record breaking 1,217,000 PPV buys.

Of course, those sorts of numbers won’t be repeated due to ‘Mania’s availability on Peacock and the WWE Network around the world, but given how much exposure would be thrust upon a programme with Reigns by the mainstream media, were The Rock to do the honours for his younger cousin, it could give the former Shield member much more mainstream crossover appeal and help establish him as a household name in the same pantheon as his older relative and the likes of former rival Cena.

But while this is all in the future, it is also a lot of fun to remember what brought The Most Electrifying Man in Sports Entertainment to such unparalleled prominence in the first place. His highly decorated, often hilarious, past inside the squared circle.

The stories have been retold countlessly about how Rocky Maivia almost didn’t make it. How the crowds turned on him with their brutal ‘Die Rocky, die’ chants. How the Nation of Domination heel turn in 1997 saved what was about to be a catastrophic failure of a push. It’s the same switch of hero/villain alignment that Vince and co are currently putting into practice with The Tribal Chief after Reigns’ own heel turn in the summer of 2020.

And the evidence is there for all to see. In 1996 and 1997 a young Brahma Bull was going nowhere fast, despite Bret Hart telling the locker room that Maivia was the next franchise player in the promotion and Jake Roberts sensationally claiming that he didn’t know whether he wanted to ‘fight or f**k him’ the first time he met Rocky.

That The Rock took to his heel role so rapidly and became so loathed instantly was a testament to just how much potential he had. A little over a year later and he was wearing World Title gold, taking in another heel turn at the expense of Mick Foley to lift the WWF Title at Survivor Series: Deadly Games. Two years on from his debut and Rocky Johnson’s son was heading in the predicted trajectory.

A generation defining feud with Steve Austin would follow, taking in three WrestleMania headline spots, the last of which would also bring the curtain down on Austin’s career. Not only did these programmes deliver some of the promotion’s most memorable matches, but promos and moments too, with The Rock finally downing Austin at the third time of asking at WrestleMania XIX, in Seattle. The two shared some words in the ring after their trilogy match and would then go their separate ways, with Austin returning more consistently in various authority roles and guest spots, while The Rock was comfortably seen off by Goldberg a month later before returning for a losing effort in a handicap match against Evolution a year down the road, tagging with longtime partner/rival Mick Foley, at WrestleMania 20.

Then, that was it. For quite a substantial amount of time. After tearing the house down night after night with Austin, Triple H, Kurt Angle, Chris Benoit, Chris Jericho, The Undertaker, Mick Foley and pretty much everyone else he stepped in the ring with, The Rock was no longer an entity on WWE television. He wasn’t making life miserable for Michael Cole or Jonathan Coachman by loudly proclaiming to them their thoughts didn’t matter or that they should quench their thirsts with tall glasses of shut up juice. He was merely just part of the rumour mill, with fans excitedly wondering when he would return.

But years continued to pass without so much as a whimper of a return. Austin came back, as did Bret Hart, Hogan periodically stopped by but, outside of a Hall of Fame induction for his father and grandfather in 2008 and a pre-recorded promo to add a little more fuel to the fire for the Donald Trump and Vince helmed ‘Battle of the Billionaires’ bout at WrestleMania 23, Rocky was still nowhere to be found on WWE TV.

FINALLY….in 2011, the artist formerly known as the Scorpion King and Wyclef Jean’s finest duet partner roared back into a WWE ring as host of WrestleMania 27, serving as the launching pad for his two year long feud with Cena, as he would cost the Doctor of Thuganomics the WWE Title in his main event outing with The Miz.

At Survivor Series of that year, back inside Madison Square Garden, where it had all begun 15 years previously, The Rock teamed with Cena to defeat The Miz and R-Truth and from there on, we were set for ‘Once In A Lifetime’.

Only, of course, The Rock’s victory over Cena in Miami four months later was never going to be a one time deal.

A year later and The Brahma Bull was now WWE Champion, having usurped CM Punk, bringing an end to the Straight Edge Superstar’s historic 434 day reign with the strap. It was slightly surreal to see the proprietor of the SmackDown Hotel as world champion once more, 11 years after he last held the title, and for some there was a slightly bitter taste left over regarding the championship victory, given that it meant Punk’s legacy defining run was brought to an end so the title could be put up for grabs in a rematch that, ultimately, didn’t really need it. But regardless of booking preferences, The Rock still put on a herculean effort in the ‘Mania main event at MetLife Stadium, somehow soldiering through suffering a full blown hernia during the match before eventually doing the honours for West Newbury, Mass’ finest.

With his stomach ripping clean off the bone, The Rock was nowhere to be seen the following night on Raw, due to his ‘Mania injury requiring immediate surgery. Said injury would rob us of a planned angle where Brock Lesnar would lay out The Great One to set up a blockbuster bout between the pair at WrestleMania 30 in New Orleans. Of course, The Beast Incarnate would instead end the Undertaker’s streak in the Big Easy while The Rock would swig back a few cold ones with Stone Cold and the Hulkster to open the show.

In fairness, given the state he was in after the Cena rematch, it’s probably a good job he was never allowed to be in the same ring as an angry Brock Lesnar, fresh off a defeat to Triple H, or we might not have been celebrating 25 years of The Rock at all, this past week.

In the intervening eight-and-a-half years since the former Nation of Domination leader stared at the lights in New Jersey, there have been rumours of the Lesnar showdown taking place, as well as a particularly memorable appearance at WrestleMania 31 leading to widespread reports that a marquee mixed tag match with Ronda Rousey against Triple H and Stephanie McMahon was on the cards. Of course, Kurt Angle eventually teamed with ‘Rowdy’ at ‘Mania 34 and Rock instead opted for return shots where he would lay out Rusev and, in tandem with Becky Lynch, verbally and physically destroy Baron Corbin during the SmackDown premiere on Fox, in 2019.

So, here we are, celebrating 25 years of the Rock and waiting on tenterhooks to see what the 10 time World Champion has in store for us next. Two nights inside the monstrous AT&T Stadium in Dallas need selling out pretty soon, and who better to command north of 100,000 people to Texas than The Great One in one of those main events? Then again, a Hall of Fame spot could beckon, although surely that would make more sense happening a year later, in the town where he has made himself the most famous movie star in the world over the past decade, Hollywood.

Whatever The Rock happens to have cookin’ next when it comes to the world of Sports Entertainment, we cannot wait to see what it is and, if that sadly doesn’t involve any in-ring activities, then so be it, we’ve still been blessed with 25 years of The Rock and we’ll still await that Hall of Fame induction with baited breath and pray for that eagerly awaited face-to-face with his little Tribal Chief cousin.

Until then, thanks for a quarter century of memories, Rock.