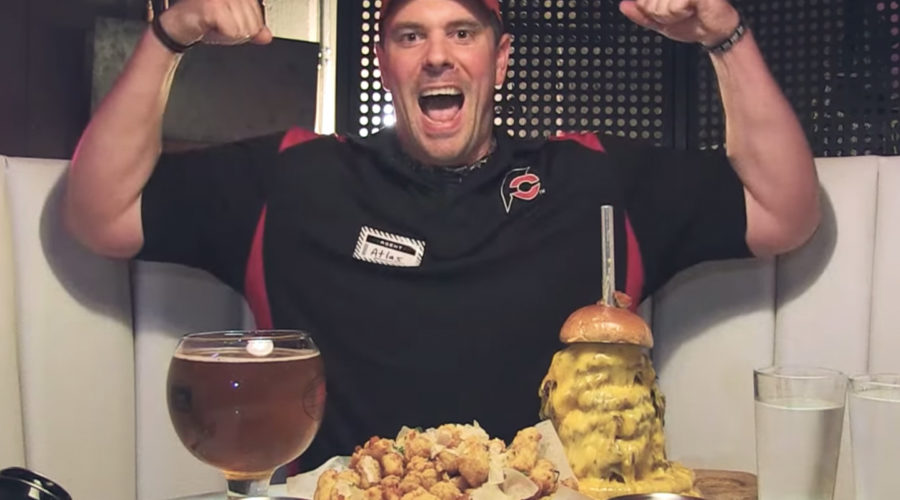 In the most random twist of fate, it appears that a friendly challenge between Wrestling Travel Founder Lee McAteer and the YouTube Professional Eating Champion, Randy Santel has been officially been made.

This Super Food Smackdown challenge has been extended after a light Twitter exchange leading up to the Royal Rumble 2019, in Phoenix, Arizona.

Santel from St Louis, Missouri in the USA, focuses strictly on winning and promoting restaurant food challenges all around the world!! He has recorded wins in 49 states and 31 countries and won’t be stopping any time soon!!

No way in hell I’d spend $13 on that Royal Rumble Burger.

Nope, not at all…. pic.twitter.com/7hxgagkpTf

The Royal Rumble Burger is a limited edition Burger only available at the event this Sunday.

We put an 18 oz. pork bratwurst patty on a toasted onion roll.

And then we topped it with fried mac and cheese wedges.

Name a charity and I’m there Randy!

The Charity challenge by Lee has been issued and now the World waits to see if ATLAS and his Team from FoodChallenges.com will accept this WrestleMania worthy match up.

Lee McAteer was asked to comment after discovering that Randy was a Professional Eating Machine.

In the most fitting form of respect, Alcock responded, “Atlas is going to Kill him……ha ha ha ha ha!!!”

Stay tuned and place your bets.