Previous:
WWE Money In The Bank 2021: How To Watch, Start Time and Full Match Card 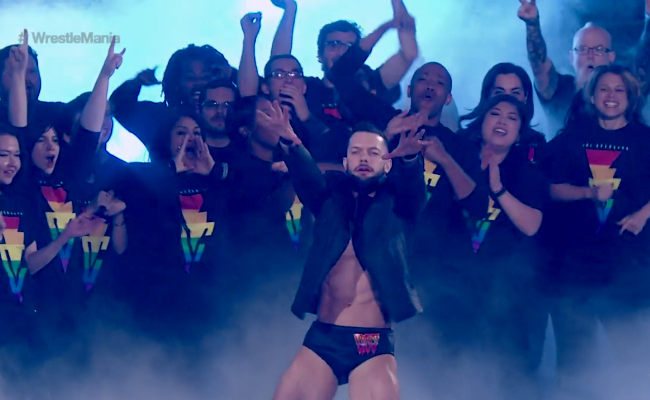 Next:
Sonya Deville On What It Was Like To Become WWE's First Openly Gay Female Superstar

Finn Balor may be reinventing his WWE career with a return to NXT, which has done nothing but generate positive headlines for the former Prince Devitt, but arguably the Irishman’s biggest, most memorable moment since he traded New Japan Pro Wrestling for Florida was his entrance at WrestleMania 34.

Opening the show against The Miz and Seth Rollins in a triple threat match for Mr. Mizanin’s Intercontinental Title, Balor made an entrance that went down in history.

The former Bullet Club leader took to the stage with dozens of members of the New Orleans LGBTQ+ community, bedecked in his traditional logo, only on this occasion, it was emblazoned in the proud colours of the rainbow, showing full public support for a section of society rarely offered such prominence in the world of professional wrestling. And on the biggest stage of all, no less.

And while Balor may have come up short in his efforts to become IC champion (that honour would be bestowed upon Rollins on this particular night), it was his entrance that had everyone talking for days and weeks afterwards.

Balor’s shirt from that event, that could be seen on everyone who was involved with his entrance, was designed to promote inclusivity of the LGBTQ+ community across the world, with 20% of all sales being donated to GLAAD.

The Irishman would go onto finally succeed in his pursuit of the IC Title by dethroning Bobby Lashley a year later at WrestleMania 35, but even his Demon King entrance in 2019 was nothing compared to his proud, powerful statement in 2018.

Another reminder of why wrestling is for everyone.