Santino Marella: From The Cobra To Cobra Kai

Previous:
Wrestling Travel Tags With GCW For The Collective 2020 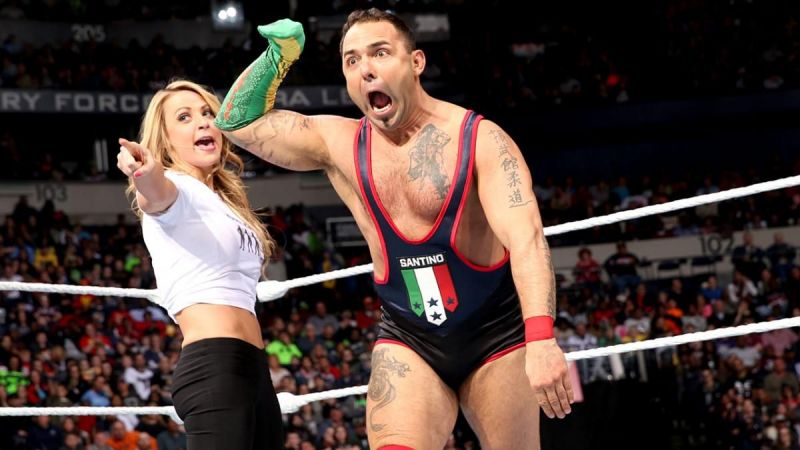 As far as wrestling careers go, not many WWE superstars have enjoyed quite as eclectic an experience as Anthony Carelli aka Santino Marella.

On 16th April, 2007, a then-unknown Santino hopped the guardrail at a Monday Night Raw taping in Milan, Italy to answer the challenge of Vince McMahon, who was seeking out challengers for his henchman and then Intercontinental Champion, the ‘Samoan Bulldozer’ Umaga.

Minutes later, this unknown, thanks to some timely assistance from Bobby Lashley, was holding the IC Title aloft as the Italian crowd reacted with a fervour usually reserved for a Serie A match. Jim Ross would proclaim the victory “the upset of the century” as an astonished (and hilariously fedora’d) Vince McMahon looked on.

Just under a year later, Marella, clad in a electric blue feather boa, was being clotheslined by Snoop Dogg at WrestleMania 24 during a Women’s Lumberjill match. Given how his career was set to evolve, this was relatively normal, with a cross dressing assisted victory a year later at WrestleMania 25 seeing Santino crowned ‘Miss WrestleMania’ as his phoney sister ‘Santina’.

There would be another Intercontinental title reign as part of the duo ‘Glamarella’ with Hall of Famer Beth Phoenix, another ‘odd couple’ partnership with Vladimir Koslov, a run as United States champion, a massively unlikely Royal Rumble runner’s up spot and a close shave with the World Heavyweight Championship inside the Elimination Chamber. Oh, and there was the Cobra. Never, ever forget the Cobra.

Life after being a WWE Superstar.

A couple of months ago, Wrestling Travel spent a day and night at the Academy to see how Carelli’s post-Santino endeavours were progressing and to get some one-on-one time with the man himself.

An alumni of the original Battlarts Academy in Japan, Carelli revisited his judoka and MMA training when he opened up his own dojo in 2013, with the help of former Battlarts chief Yuki Ishikawa.

Fast forward six years and Battle Arts is a thriving academy where both children and adults can train in all manner of combat sports, whether it be boxing, MMA or pro wrestling. The venue even hosts live amateur boxing and pro wrestling events for promotions such as Destiny Pro and Impact in it’s Don Kolov Arena.

One boxer who can be found studying the sweet science inside the walls of Don Kolov is two time Canadian 75kg Champion, Triston Brookes, who was kind enough to devote a few minutes of his time to WT’s cameras for an exclusive interview:

So while the singlet may have been exchanged for a Gi and the Cobra may have now been defanged, the Artist Formerly Known as Santino/Santina still has plenty to contribute to the present and future of professional wrestling.

If you want to find out more about Battle Arts, you can follow them on Twitter @BattleArts_PRO and visit the official website HERE. And if you wish to follow a former multiple time Intercontinental Champion and the inaugural Miss. WrestleMania, the one time Santino is on Twitter @milanmiracle.