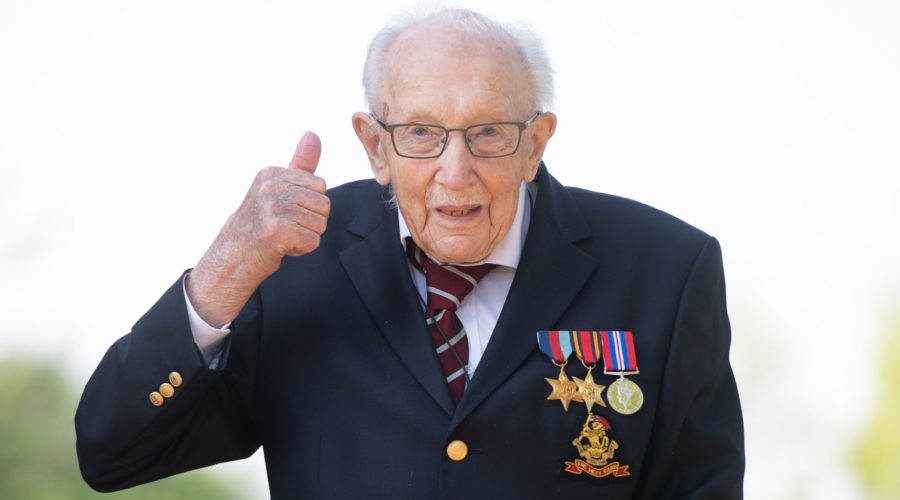 WWE World Heavyweight Champion Drew McIntyre has proudly proclaimed that Captain Moore’s attempt of fundraising was nothing short of amazing and extraordinary.

The Sports Entertainment heavyweight has bestowed a personalized WWE Championship upon the inspirational hero.

Speaking with The Metro, the WWE World Heavyweight Champion from Ayr, Scotland said:

“He is a true hero who stepped up when his country called in World War II, and who stepped up again today with the same selfless courage and determination to help others.”

‘At WWE our mission is to put smiles on people’s faces around the world. Captain Tom Moore has achieved that by uniting millions across the world in support of his truly outstanding fundraising endeavors.

‘Captain Tom, I look forward to shaking your hand in person someday.’

The World has been inspired by Captain Tom’s achievement of raising more than £29 million for NHS charities by walking laps of his garden at his home in Marston Moretaine near Bedford.

His original target of £1,000 was broken in around 24 hours and he extended his challenge to 200 laps after he completed the first 100 14 days ahead of schedule.

Tom was born and brought up in Keighley, Yorkshire. He went to Keighley Grammar School and later completed an apprenticeship as a Civil Engineer. Tom went onto being enlisted in 8 DWR (145 RAC) at the beginning of the war, and in 1940 was selected for Officer training.

He was later posted to 9DWR in India, and served and fought on the Arakan, went to Regiment to Sumatra after the Japanese surrender, and returned to be Instructor at Armoured Fighting Vehicle School in Bovington.

He has since been overwhelmed by the Public’s generosity and was able to send a public message via his Official Twitter last night which read:

If you would like to donate to help raise funds for NHS Charities please do so by visiting the official Just Giving page, listed below.

On behalf of Wrestling Travel, we would like to convey our sincere best wishes and congratulations to the Undisputed National Treasure that has captured our hearts and lifted our spirits during these uncertain times.

Captain, we salute you.