Jericho’s Greatest Transformation Yet… A Meme! 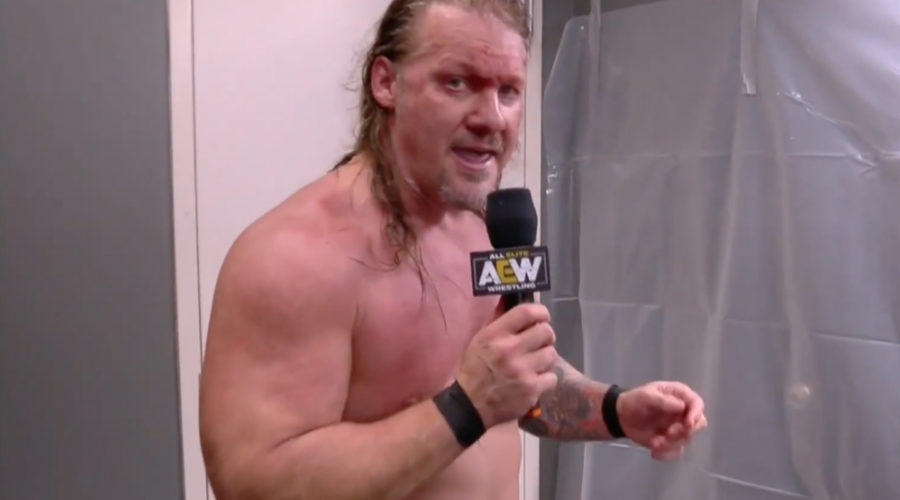 As AEW All Out closed on Sunday Night, Chris Jericho stood tall as the upstart promotion’s first ever champion. The show had been a success, and Jericho’s victory over ‘Hangman’ Adam Page had been a worthy centrepiece of an exciting card. Little did anyone know that this historic title win would be merely the start of a whirlwind week for the former Y2J.

If you have even a passing interest in pro wrestling, and functioning wi-fi, you’ll already know the next part of the story. The resultant memes have been unavoidable, and the t-shirt is already available to purchase, such is the significance of what happened next. As part of AEW’s post-show, Jericho was filmed venturing into the backstage area cradling his newly-won gold. He stopped periodically to lambast various wrestlers including the Young Bucks (“The pleasure’s all yours, Bucky boys!”), Brian Pillman Jr. (“Nice hair, idiot!”) and the Librarian (“You gonna tell me to shush? Up yours!”). As engaging as this impromptu roast was, Jericho’s piece de resistance was yet to come. The new champion arrived at a buffet table, and after criticising the catering, came across a bottle of champagne. “Ooh, a little bit of the bubbly!”, he exclaims with the same inflection he used to spit lines such as “Ayatollah of Rock ‘N’ Rolla.”

Those seven words fell into the hands of the ever-creative wrestling Twitter community, and spawned in literally dozens of shapes and sizes. There’s a Limp Bizkit remix, a radical re-thinking of Lou Bega’s mega-hit Mambo No.5 and even one with the sentence chopped up and spliced together with Brock Lesnar’s theme tune. Memes serve as currency in the millennial zeitgeist, and shares in Chris Jericho were massively up. The veritable meme-storm only intensified when news broke of a police report detailing how the Fozzy frontman’s title belt had been stolen while he partied at Longhorn Steakhouse. The belt was soon recovered and the memes kept coming. Pro Wrestling Tees have created the inevitable merchandise, and “A little bit of the bubbly” looks set to be a fixture on the List of Jericho for a good while.

Chris Jericho’s renewed relevance in 2019 is, as the champion himself would put it, apropos. No wrestler has successfully reinvented themselves more often than the legendary Canadian. Most superstars come to a point in their career where their act reaches it’s peak and are content to keep selling the same product even long after they retire. This is no knock on them, Ric Flair wouldn’t feel right presented as anything other than the limousine-ridin’ Nature Boy for example. However Jericho has managed to stay an active and creatively exciting part of modern wrestling by constantly finding ways to evolve.

His first notable reboot was perhaps an enforced one. Thrust into WCW in the summer of 1996, Jericho’s initial turn as a white meat babyface was doomed from the start. The Atlanta company was leading the charge for a new style of product, and Jericho’s clean-cut anachronisms were never going to translate to the era of the impossibly cool New World Order or Sting, strikingly monochrome in his The Crow inspired get-up.

Jericho re-positioned himself as a cowardly heel, with hilarious and career-saving results. His antics included hiring overweight ring truck driver Ralphus to serve as his personal security, reading a list of 1,004 wrestling holds he knew and mockingly introducing his rivals into the ring during a battle royal before leaving to get coffee. Jericho’s comedy timing, and blossoming charisma earned him the admiration of the crowd. He found himself on the cusp of a PPV match with Goldberg, however when the idea was quashed by Hulk Hogan, Eric Bischoff and Goldberg himself, he sought pastures new in the form of the WWF.

Here he would undertake perhaps his most enduring transformation. Chris Jericho signed for the WWF in the summer of 1999, at the height of frenzied worries over the millennium bug causing worldwide technological issues. As Y2K approached, countdown clock vignettes aired on Federation programming, counting down to the purported coming of ‘Y2J’.

As the countdown reached zero, established megastar and current box-office titan The Rock was in the middle of a trademark rapid-fire promo. The lights went out, pyro exploded and the name ‘JERICHO’ was spelled out in giant letters on the Titantron. The crowd lost their minds, and an enduring star was born. Jericho strode onto the stage, his shock of blonde hair flowing from a top-knot, and welcomed everyone to “Raw Is Jericho”. The Y2J name and the catchphrase continues to endure to this day, but Jericho himself continued to find ways to regenerate his act at every turn.

The ensuing years would give us many textures to his character. Jericho was the everyman who stood up to the McMahon-Helmsley regime before becoming the subservient Undisputed Champion cleaning up after Stephanie McMahon’s dog. He was the self-proclaimed ‘Huge Rock Star’ as his on-screen character blended with his real-life role as frontman of the metal band Fozzy. From here, Chris pirouetted into a lovestruck teenager besotted with Trish Stratus before being the subject of a Matrix-style viral marketing campaign during a 2007 comeback that birthed the ‘Codebreaker’. He portrayed a violent sadist in his feud with Shawn Michaels then became a suit-wearing, sneering world champion.

As Fozzy began to take priority, Jericho’s sabbaticals would always be followed by a fresh coat of paint upon his return. Jericho took exception to CM Punk’s growing reputation as ‘The Best In The World’ and tried to reclaim that mantle. His most recent WWE stint birthed ‘The List Of Jericho’, and led to many current WWE superstars being told “You just made the list!” as the crowd echoed his every word. Since leaving the company, his New Japan and AEW work has seen him once again create an exciting new persona for himself. Aged 48, Jericho has cast himself as a disgruntled veteran constantly demanding those around him acknowledge his immense achievements in the business. This quest has taken him to Japan for acclaimed bouts with the likes of Kenny Omega, Tetsuya Naito and Kazuchika Okada. Now he finds himself as the crown jewel in AEW’s emerging wrestling empire.

Chris Jericho is a man who can become anything he chooses, and despite his advancing years he remains one of the most discussed and venerated acts in the business. In 2019, he did this in the most effective way possible. Add ‘viral meme’ to the list that already includes Y2J, Best In The World, Lionheart, Huge Rockstar, and Painmaker. Chris Jericho is here to stay. Now that calls for a little bit of the bubbly.