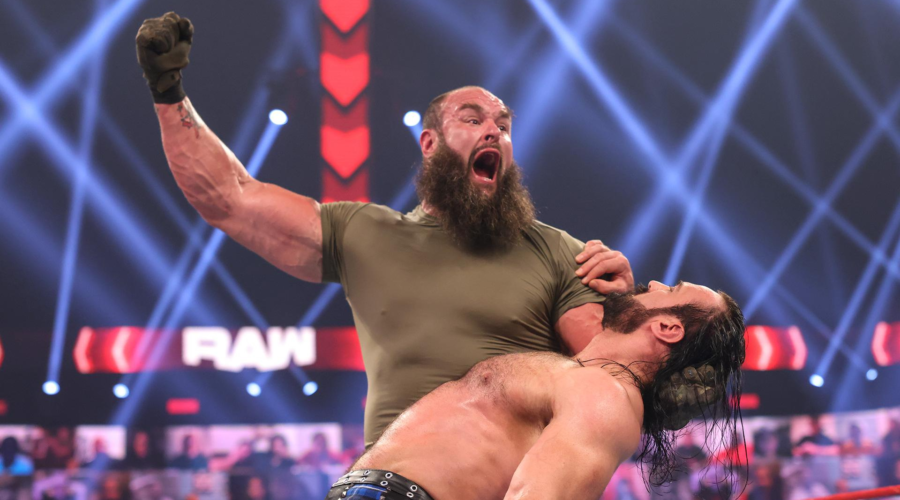 Next:
What To Do In Dallas During WrestleMania 38 Weekend
Photo credit: wwe.com

Despite being slated to team with Drew McIntyre, The Monster Among Men looked to make a statement by going it alone. After MACE & T-BAR began teeing off on Braun Strowman, The Scottish Warrior came running to his aid and set up the originally scheduled showdown. The Strowman Express got rolling, but an inadvertent clothesline by McIntyre derailed the offensive and resulted in a count-out loss for the unlikely alliance.

An A-List musical display was met with a second act of rotten tomatoes from Damian Priest, Kofi Kingston & Xavier Woods. The New Day made sweet music of their own, but the devious tactics of the opposition kept them on their toes throughout. After an incredible aerial display from Kingston and The Archer of Infamy, Woods swooped in for a swift inside cradle to pin Jaxson Ryker.

Charlotte Flair’s unhinged attack on a WWE official had earned her a hefty fine and an indefinite suspension, but Sonya Deville apparently had her own plans for reinstatement. Appearing to act separate from the direction of WWE Official Adam Pearce, Deville brought out Eddie Orengo to allow The Queen to make an apology and receive her reinstatement.

After last week’s beatdown of Humberto Carrillo, Sheamus once again rolled out a United States Title open challenge. New week, same result, as Carrillo once again answered the call and this time was prepared for The Celtic Warrior’s early onslaught. The message had been sent, and Carrillo left Sheamus irate and out of sorts down behind the announce table.

The incarnation of R-K-Bro sent shockwaves through the WWE Universe, and the debut of Riddle & Randy Orton as a tandem did not disappoint. Cedric Alexander & Shelton Benjamin’s seasoning was an advantage early, but The Viper & Original Bro got rolling and teed up a Floating Bro for the win.

Rhea Ripley, Nia Jax & Shayna Baszler walked in with all the gold, but Asuka, Naomi & Lana were looking to make their title aspirations clear. Mandy Rose & Dana Brooke emerged to continue their crusade against the WWE Women’s Tag Team Champions as a splash attack left Baszler drenched and Jax embarrassingly slipping and sliding outside the ring. Lana nearly stunned everyone with a near-fall on Ripley, but the Raw Women’s Champion responded with a Riptide and tagged in Jax for a Leg Drop and the win.

After her earlier reinstatement, The Queen was matched for a showdown with Mandy Rose. As Rose excelled as the aggressor, Charlotte Flair turned her frustrations on official Eddie Orengo that nearly resulted in a defeat. Flair channeled her anger and rocked Rose with a Natural Selection for the victory.

As Braun Strowman looked to battle past Drew McIntyre for a spot in the WWE Title clash at WrestleMania Backlash, The All Mighty WWE Champion headed down to the ring to make his presence felt. The Scottish Warrior put on an unreal display of strength with incredible slams and suplexes of the gigantic Superstar, but the strength of The Monster Among Men had the final word. Attempted interference from Bobby Lashley, MVP, MACE and T-BAR allowed Strowman to regroup and smash a Running Powerslam on McIntyre for the high-stakes win.