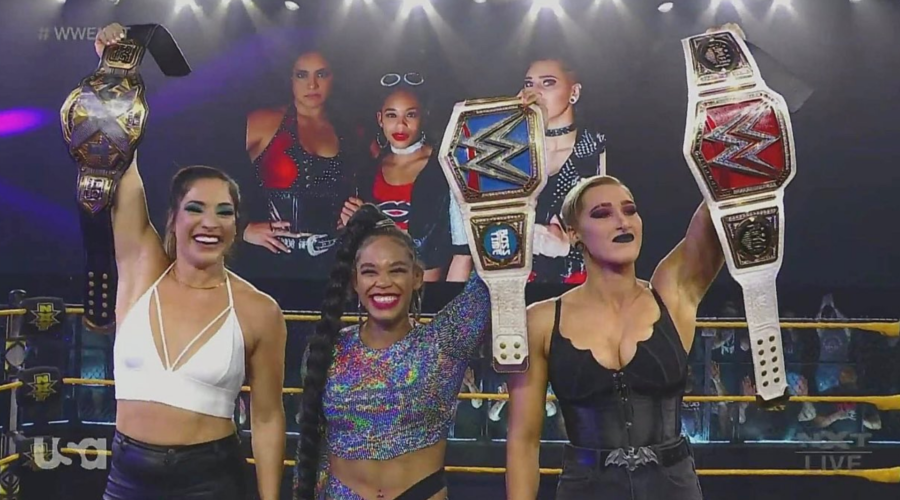 The black-and-gold brand may be entering its darkest era under the rule of the destructive Karrion Kross and the sinister siren Scarlett. The new NXT Champion gave respectful props to former champion Finn Bálor after their tenacious bout at NXT TakeOver: Stand & Deliver, but he promised to steamroll every future challenger until none remained.

Perhaps surprisingly, Killian Dain & Drake Maverick controlled much of the action, continuing to showcase their improving chemistry. But MSK turned the tables with high-octane tandem offense, as well as an impressive, innovative corkscrew splash from Wes Lee on Dain. Lee and Nash Carter closed the books on their first title defense after planting Drake with a combination blockbuster.

Afterward, Alexander Wolfe confronted his former ally Dain, but it proved to only be a smokescreen for a full-on Imperium ambush by Marcel Barthel and Fabian Aichner.

After challenging Mercedes Martinez earlier in the day, Jessi Kamea looked fully prepared for the huge opportunity and dominated her more experienced foe early. It was only a matter of time until Martinez’s veteran savvy won out, though, as she dropped Kamea with an Air Raid Crash for the victory.

Martinez wasn’t finished, however, as she slammed Robert Stone into the barricade until he handed over the money he owed Martinez in exchange for her teaming with Aliyah in a bout last month.

Santos Escobar may rue his decision to issue an open challenge, as NXT’s resident Time Splitter answered the call in a major way. The two battled in a a back-and-forth classic, with Escobar demonstrating his mean streak as he smashed Kushida head-first into the steel steps. Kushida fought back valiantly and scored a near-fall after connecting with a kimura superplex.

The combatants eventually found themselves trading pinning combinations with Kushida eventually one-upping The Emperor of Lucha Libre for the massive title victory, leaving Escobar and the NXT Universe in shock.

The highly anticipated arrival of Franky Monet came to fruition as she interrupted the new NXT Women’s Champion, promising that Raquel Gonzalez would be seeing a lot more of Monet in the future.

That confrontation wasn’t the only surprise for “Big Mami Cool,” as new Raw and SmackDown Women’s Champions and former NXT products Rhea Ripley and Bianca Belair made surprise returns to the Capitol Wrestling Center to share a special moment in the ring with their titles.

After being targeted by Leon Ruff from the outset in last week’s Gauntlet Eliminator, Isaiah ‘Swerve” Scott returned the favor by immediately taking the punishment to his rival. “Swerve” built off of his impressive performance at TakeOver, hanging Ruff out to dry on the top turnbuckle before spiking him with the JML Driver for the win.

Ruff vowed their issue wasn’t over, however, showing an uncharacteristically vicious side as he ambushed “Swerve” backstage after the match.

In addition to pitting rivals against each other, this unique encounter also featured the smitten Indi Hartwell and Dexter Lumis. The other Superstars couldn’t separate the star-crossed admirers for long, despite repeated rebukes from Candice LeRae in particular.

The in-ring action was chaotic from the opening bell with all eight competitors trading offense, including Ember Moon taking down Johnny Gargano with a beautiful tope suicida, as well as LeRae planting Lumis with a diving tornado DDT on the outside, seemingly scolding him for his involvement with Hartwell. Bronson Reed even used partner Shotzi Blackheart as a weapon at Blackheart’s request, launching her to the outside to take out the other competitors.

Back in the ring, Lumis slapped Silence on Gargano, only for Hartwell to seemingly play dead to draw Lumis’ attention. Austin Theory blasted Lumis in the back as he appeared ready to lock lips with Hartwell, who was left upset that her plan was foiled.

Not deterred for long, Hartwell tossed Theory — her own teammate — to the outside before again lying on the mat. Taking the bait, Lumis cradled Hartwell and exited the Capitol Wrestling Center with her in his arms.

Moments later, Reed flattened Theory with the Tsunami splash to score a pinfall victory, ending one of the most unpredictable and strangest bouts in the history of the black-and-gold brand.