Wrestling music that hit’s all the right notes 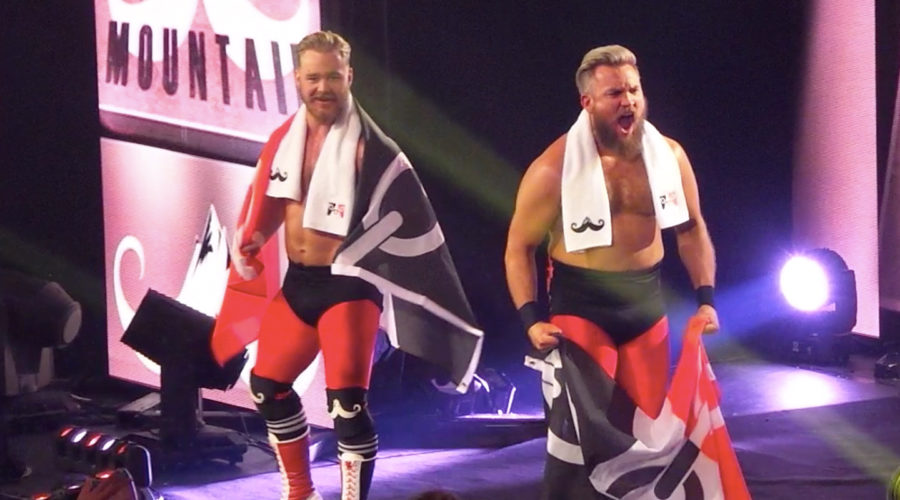 I’ve been very open about the fact I am relatively new into the wrestling scene and make no qualms that I have not much of a clue what happened pre 2017.

However, in the short time that wrestling has been a part of my life, I can tell you it has had such an effect that I have gone from not knowing what a wrestling match was, going to my first Indy show, training, to now working in the business in various roles.

I had to ask the social media’s for their opinions too to get a more varied response as it would have been a very recent post! In my opinion, I believe that having certain songs as entrance music can really change an atmosphere for the better.

The first entrance song I’m going to touch on is… Jimmy Havoc’s theme which is AFI – I hope you suffer.

The time this song gave me goosebumps and a moment I will never ever forget, was at Fight Club Pro – Project Mayhem 2017.

We were waiting for the opponents to come out for Ricky Shane Page and Drew Parker. They where stood in the ring. Then darkness. The opening bar to ‘I hope you suffer’ starts and lights shine behind the crowd… the excitement of Jimmy Havoc’s music and trying to look for him at the entrance ramp… only to see a whole new ring aka the ‘death house’ in a secret/hidden part of the venue which was covered by a large black curtain which when lowered revealed Jimmy Havoc stood wearing white accompanied by Clint Margera in the new and death-like ring.

That excitement of knowing this was going to be a ridiculously good match by the first 5 seconds of a song. As the song continues the crowd join in ‘I FACED DESTRUCTION AND YOU – JUST KILLED ME AND WALKED AWAY’ and the goosebumps continue. Then the match starts. Of course. A death-match. The music was a special moment. I still think about that moment often and i truly believe that without that music, it wouldn’t have had the same effect. The fact people can sing along and the lyrics are very relatable to the situation. ‘I hope you suffer. Just like I suffered.’ 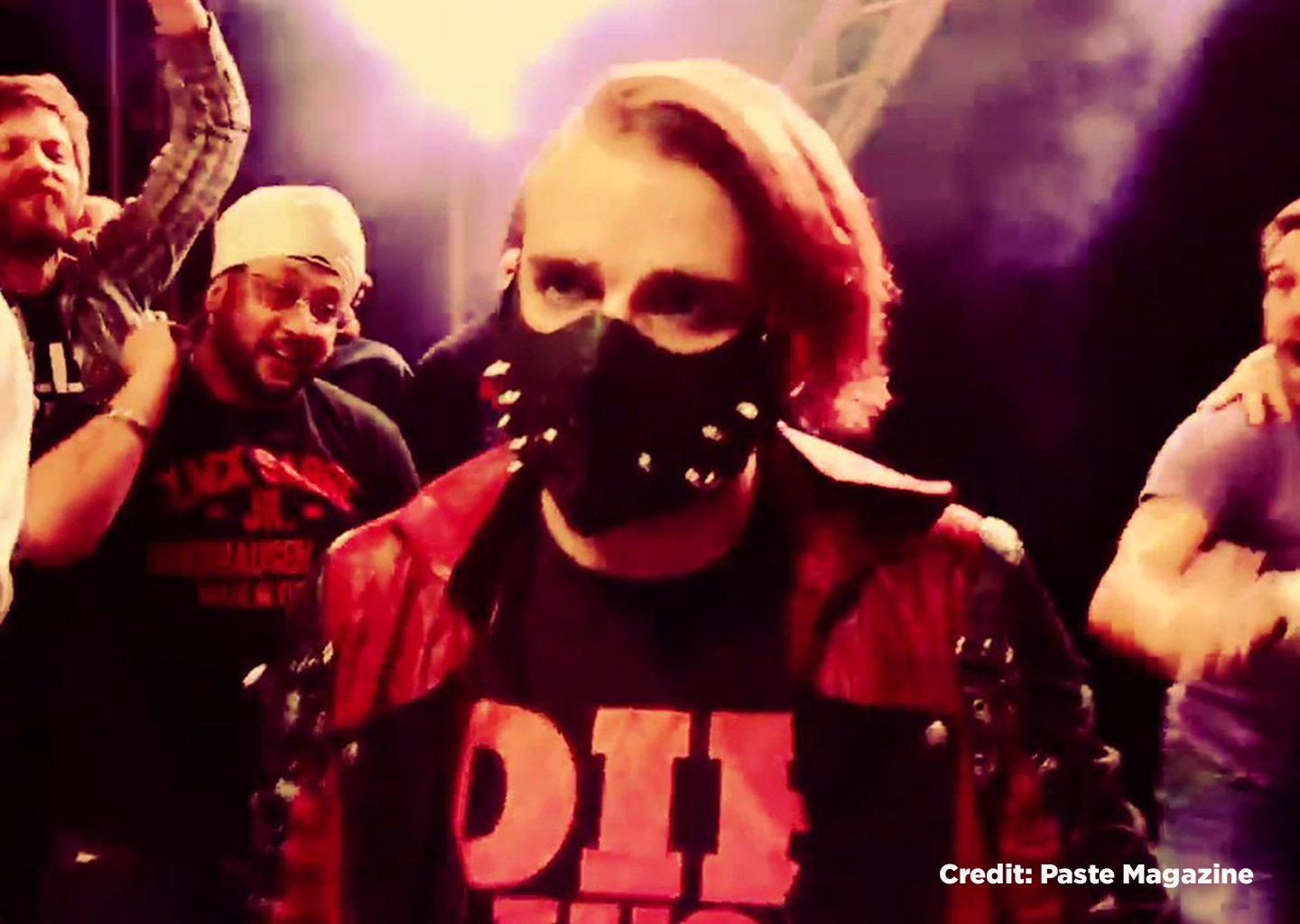 Moustache Mountain use this song on the indie scene. (On WWE Shows, WWE use their own songs which are also bangers to be fair!) This song has an unmistakable beginning. With the flutes… however that sometimes gets missed off as the start of the song is powerful enough and it goes straight into the brass of the intro. With its groovy and catchy verse which is an all-time classic song (kind of like how Trent is a classic type gentleman with his suave look) It has the perfect tempo for the guys to walk/strut out to, and it builds up to a singalong chorus that is perfect for presenting themselves in the ring – and a twiddle of them moustaches. When the crowd emphasise on the SLEDGEHAMMER part is the moment the guys pose on the ropes to show ‘THIS IS US. THIS IS OUR TESTIMONY. We are a solid team.’

This song is bound to cause a pop when Moustache Mountain come out. Not only are they brilliant wrestlers, but they can also work the crowds and this song just really suits them as a team. ‘I want to be your sledgehammer Why don’t you call my name Oh let me be your sledgehammer This will be my testimony’ 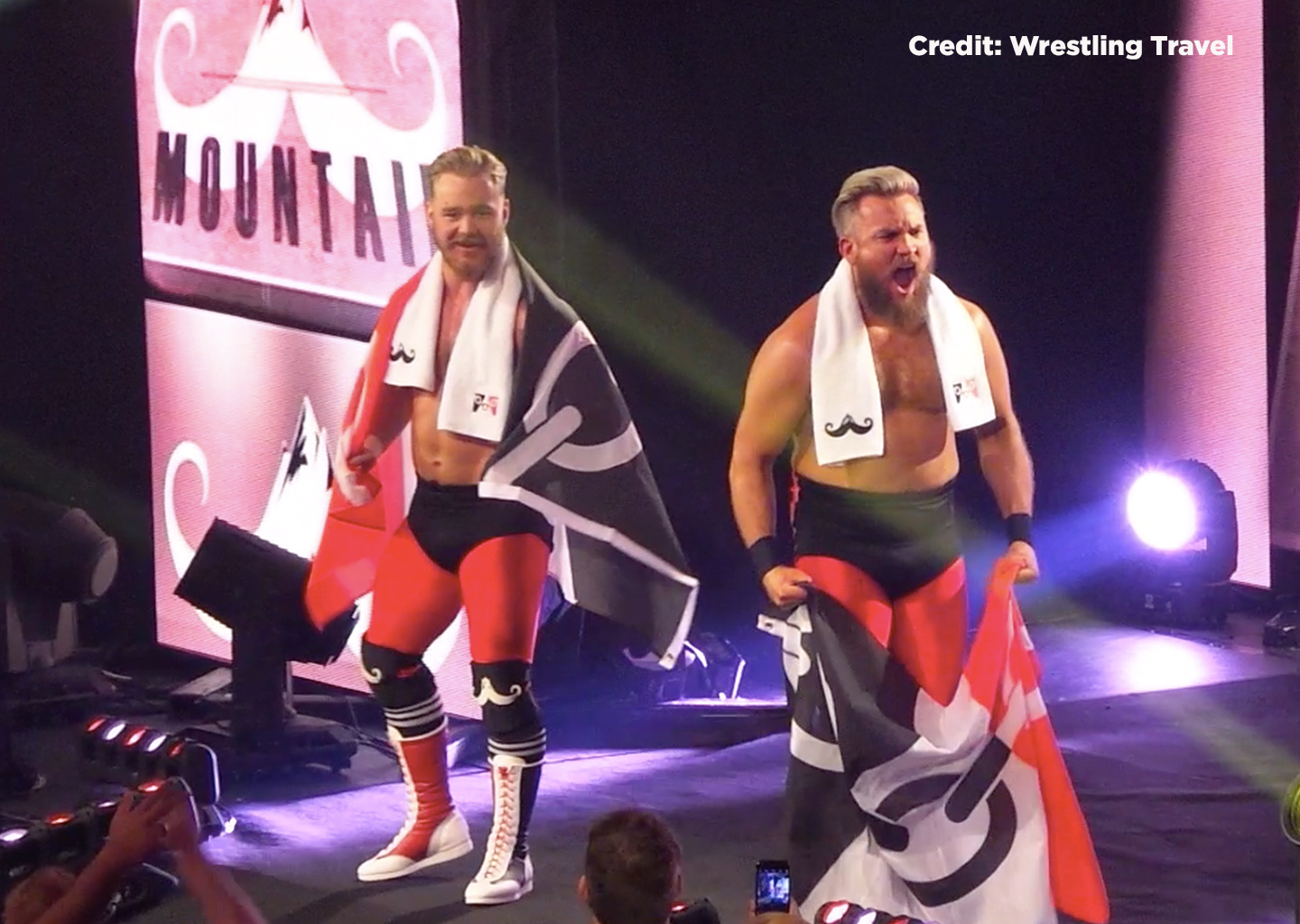 To get a wider perspective on this, I turned to social media to ask what my followers and friends thoughts were on specific entrance music and which specific songs stick out in their memory.

The one that seems to be mentioned a lot is Stone Cold Steve Austin’s entrance  Glass Shatters by Disturbed.

The general consensus is that no matter what song follows the glass smash—you know exactly who is coming and what is on the cards. As I don’t really have much knowledge of earlier WWE and earlier wrestling, I have looked at what my friends wrote and watched some videos of Stone Colds entrances on various matches and I can 100{fd0d17938b9af1e89bbb54363afbdf55ec82b4a7f0e3f4e9de84384852b85838} see exactly why so many people have mentioned it. The glass shattering is a perfect example of getting you within the first few seconds of knowing who’s about to come out. Then the music is a bonus on top of that. I can imagine being in a bar and a glass smashes and expecting to see Stone Cold coming through the kitchen doors!

Some other entrance songs that give me the feels when I hear them:

Finn Balors ‘Catch your breath’ – when I was at NXT Takeover Blackpool, seeing everyone on their feet and seeing the sea of arm movements was legitimately moving (so much so I fell off my seat I was stood on!)

Symphony Number 9 in E Minor –  which is Walters music.

A classical piece of music that is perfectly matched to Walter, its very bold and again, the first 2 notes  – without seeing anything – you know he’s coming.

I really believe that music plays a big part in the atmosphere of a show. I did a ring announcing show and I requested to have some entrance music myself—I used Paramore—Misery Business—and it just gave me a boost of energy to hear a song I love  and gave me a few moments before the song kicked in after the into to be like ‘RIGHT LETS DO THIS’ and so far that has been my best show and the show I felt most confident doing. I chose this song because its what I grew up listening to, it also sang by a female vocalist which I feel is important to me—girl power etc!

I understand due to licensing issues that not all companies can use the specific songs that the wrestlers and fans are used to using and hearing but I do believe in my personal opinion that it has a better atmosphere when the songs that are known are able to be used. There is something special about hearing a song and knowing who’s going to come out before they even step from behind the curtain. The pitch black suspense within particularly Walter and Jimmy Havoc, just adds to the suspense and excitement.

I hope you have enjoyed hearing about my thoughts about music in wrestling and thank you to everyone who commented and gave their opinion.