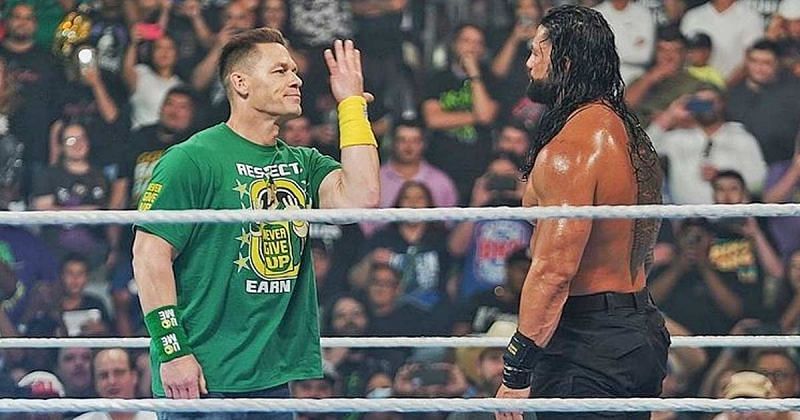 Next:
Impact Star Rohit Raju Drops By The LockDown Sessions

Well, that was an interesting couple of days, wasn’t it?

It’s safe to say it’s been quite the chaotic long weekend in WWE, with Nikki Cross cashing in her newly won Money In The Bank contract to dethrone Charlotte Flair, who herself had only secured her 14th reign 24 hours earlier.

On top of that, John Cena received a GOAT level pop for the ages when he interrupted Roman Reigns’ celebrations in Fort Worth on Sunday night and, to further anger the Tribal Chief, the Doctor of Thuganomics called the Universal Champion an asshole on Monday Night Raw and laid down a challenge for his title at SummerSlam.

Speaking of returning title challenging legends, Bill Goldberg popped up to tell Bobby Lashley that he was next, right after the All Mighty had seen off the challenge of the also returning Keith Lee. Despite how handily Lashley dismantled Kofi Kingston at Money In The Bank, we can’t imagine the WWE Champion will have such a dominant night against big Bill in Las Vegas next month.

Lee wasn’t the only NXT alumni to make a surprise showing in Dallas, last night, however. Current NXT Title holder Karrion Kross showed up sans Scarlett Bordeaux to go one-on-one with Jeff Hardy, who arrived complete with ‘No More Words’ accompanying him to the ring for the first time in over a decade. Kross, who has remained undefeated for the best part of a year on the black and gold brand, suffered his first loss to the Charismatic Enigma, in a move which, as you can probably imagine, was met with a completely mild, measured reaction on social media.

The last two shows really set up quite a different looking landscape in WWE, with Seth Rollins also firmly in the crosshairs of Edge, having played a pivotal role in the Rated R Superstar failing in his quest to become Universal Champion for the first time. Suddenly fresh new feuds are on the horizon, along with new champions in very new roles and gimmicks. We have potentially the most exciting Mr. Money In The Bank of all time in Big E, who won a ladder match for the ages on Sunday. And even though Cena and Goldberg returning may not be ‘fresh’ per se, it’s for marquee matches that the masses will clamour for inside the 72,000 seater Allegiant Stadium in Las Vegas.

While Lee and Kross may have come up short in their return matches, there is still plenty of time for them to be given something meaningful to accomplish at SummerSlam, which could help cement them as ones to watch between now and WrestleMania 38. Kross could of course continue his programme with Hardy while Lee could easily pull off great matches with pretty much anyone on the Raw roster. Maybe prizing the US Title of Sheamus could be a fun starting point for the former NXT and North American Champion?

The return of fans certainly seems to have reinvigorated WWE, with a buzz around the product not seen since WrestleMania in April and probably overall since post-Royal Rumble last year. And with a Becky Lynch return constantly being teased on top of Sasha Banks being due back any day now, the star power is only going to continue to rise. Oh, and there’s still those persistent Brock and Rock rumours that refuse to go away.

Oh, and Omos continues to be incredible and we cannot wait for him to hold every single title in the company.