Previous:
Is the WWE 24/7 Championship a good idea? 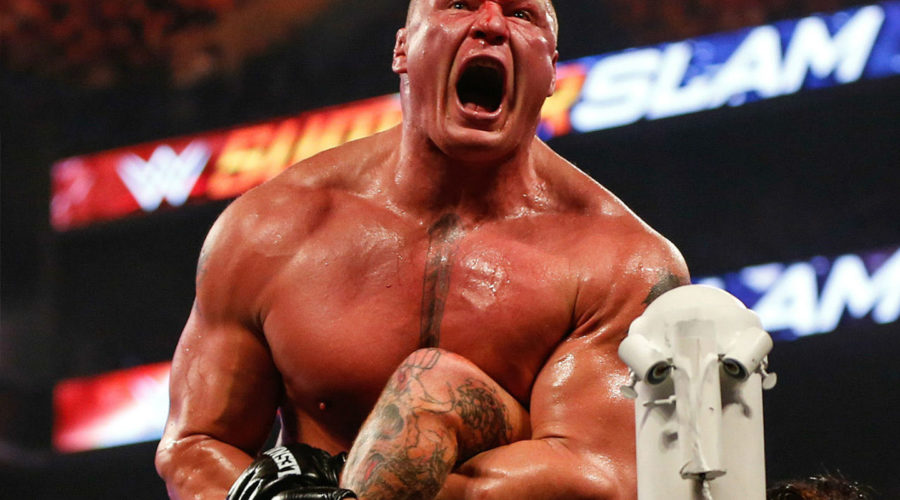 This past Sunday at the annual WWE Money in the Bank event, In an unexpected  “The Beast Incarnate” Brock Lesnar returned to WWE after his crushing defeat at the hands of WWE Universal Champion Seth Rollins, at WrestleMania 35.

The best superstars from the world of RAW and SmackDown competed in the annual Money in the Bank Ladder Matches in Hartford, Connecticut.

In a shock twist, 41-year-old Lesnar added himself to the Ladders Match after Sami Zayn was taken out backstage prior to the event.

And his surprise return was a triumphant one, as Lesnar won the Men’s Money in the Bank Ladders Match, defeating Drew McIntyre, Baron Corbin, Ricochet, Ali, Randy Orton, Andrade and Fin Balor to walk away with the briefcase.

With Lesnar back in the ring, below we have listed his top 10 moments in WWE.

The Main Event of WWE’s flagship show, Lesnar faced-off in the ring against long-time rival Kurt Angle in a match which did not disappoint the crowd watching on in Seattle.

The two superstars grappled back and forth before Lesnar gained the upper hand on his opponent, performing an F5 move twice throughout the contest.

And instead of covering Angle, Lesnar climbed up to the top rope to botch a Shooting Star Press which Angle covered by unsuccessfully pinning the South Dakota-native, who kicked out.

Angle then picked up Lesnar but was hit by a third F5 which saw Lesnar pinning Angle to claim the WWE Title.

One of the most iconic moments in WWE occurred at SmackDown back in June 2003.

After a hard-fought battle, Lesnar and his rival, Big Show, were locked in a stalemate after exchanging moves on one another.

Lesnar then found himself on the top rope held on to his opponent before performing a Superplex on Big Show, which saw both wrestlers flip over and end up breaking the ring in a memorable moment in WWE’s history since its formation back in 2001.

During the match, Lesnar was dominant throughout, performing the F5 move on Cena while also executing 16 German Suplexes on Cena.

Having applied the Stepover Toehold Facelock in an attempt to get back into the contest, Cena would eventually end up the loser as he failed to defend his title.

Lesnar escaped the hold as he performed another F5 to land the title and beat Cena in the ring.

Following on from a hiatus from WWE which eight-years from 2004-2012, Lesnar subsequently returned to the circuit on April 2, 2012 editions of RAW.

After leaving WWE the first time around, Lesnar embarked on a career which saw him compete with the Japanese promotions between 2005-2007 while he also fought in UFC.

But a return to WWE was always on the cards and Lesnar was signed back up by the franchise and was unveiled to a stunned audience.

Returning to the WWE ring for the first time since WrestleMania XX, his first action was to attack Cena to mark his entrance back to the sport.

For the thousands of fans packed into the Mercedes-Benz Superdome and the millions of followers watching the televised broadcast in their living rooms, they witnessed a rare event.

But then along came Lesnar, who took an early advantage in his match against The Undertaker.

After dealing with an unsuccessful tombstone pile-driver attempt from The Undertaker, Lesnar earned the title after performing a third F5 to end the unbeaten streak.

A year into his New Japan Pro Wrestling stint in the Far East, Lesnar was celebrating more success as he added an IWGP Championship belt to his collection from his WWE days.

Competing at the Toukon Souzou New Chapter Event which was held in Tokyo, Lesnar defeated Kazuyuki Fujita and Masahiro Chono in a Three-Way match to contest the IWGP Heavyweight Championship.

Lesnar would hold onto the belt for 280 days, defending his title three times until he failed to show up to a scheduled match and was stripped of the Championship on July 15, 2006.

After leaving wrestling behind, Lesnar took up a career in Ultimate Fighting Championship (UFC).

He remained as a UFC fighter for a further three years, but lost his inaugural bout, losing to Frank Mir inside the octagon, but he would return 17-months later after an intense training regime to seek revenge.

Having not fought in the octagon for well over a year, Lesnar won his first UFC Championship title on July 11, 2009, getting the better of Mir in the rematch.

Following his first victory, Lesnar went onto feature in three separate fights, winning one of them against Shane Carwin and losing the following two bouts against Cain Velasquez and Alistair Overeem.

Lesnar’s final fight in the octagon was on June 9, 2016 at UFC 200 which came against Mark Hunt, an outcome that was overturned.

The No Way Out Pay-Per-View event, which was hosted in California back in February 2004, consisted of eight matches, including Lesnar vs Eddie Guerrero.

Billed as the Main Event match which would bring down the curtain on the show, a match which saw controversial moments.

As Lesnar attempted an F5, he knocked down the referee, looking to take advantage by grabbing the WWE belt to hit Guerrero with it.

As this point, Bill Goldberg jumped into the ring to defend Guerrero, and because the referee was disqualified, Guerrero could not be disqualified.

Guerrero then countered Lesnar’s F5 into a DDT before kicking the belt out of the ring to perform a Frog Splash and pin his opponent which clinched the WWE Championship title.

Having met in the ring the previous month in acrimonious circumstances, Lesnar and Goldberg went head-to-head at WrestleMania XX at Madison Square Garden in New York.

In the seventh match of the night, where Stone Cold was Special Guest Referee in the 13-minute clash, which saw both men beginning the clash by staring each other down following the previous bad blood.

Both wrestlers would go on to leave WWE directly after the match, as Goldberg defeated Lesnar, which was overshadowed by Austin’s involvement as the referee.

After exploding onto the WWE scene in his early 20s after earning accolades when he was competing at the University of Minnesota, Lesnar’s stock grew even higher in June 2002.

Having gone into the King of the Ring tournament as a two-time All American, Big Ten Champion and the 2000 NCAA Champion, he was the next big thing.

His triumph at the King of the Ring tournament held in Ohio, saw him become the youngest WWE Champion at the age of 25-years, one month and 13 days, just nine-months on from his WWE debut.