The Thundering Heartbeat Of Professional Wrestling

Previous:
Who Will Be The Surprise Entrants In The 2020 Royal Rumble Matches? 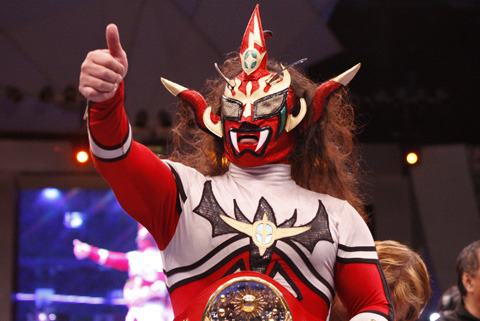 Next:
WWE Returns To Free-To-Air TV In The UK

The opener of night two of New Japan Pro Wrestling’s Wrestle Kingdom 14 extravaganza, Liger teamed with old rival Naoki Sano to face current IWGP Jr. Heavyweight Champion Takahashi, and his partner Ryu Lee. A logical generational clash and a fine contest to open the evening’s proceedings, the Tokyo Dome crowd lapped up the engrossing action. When the referee’s hand hit the mat for the third time however, he was not just bringing an excellent match to a close. The final bell signified not only the end of the match, but the end of the 35-year career of Jushin Thunder Liger.

One of wrestling’s true pioneers, you will find no shortage of words written about the unbelievable legacy of the Japanese icon. Breathtaking accounts of his bloody battle with The Great Muta, his revolutionary series with Brian Pillman or his Super J Cup stunners opposite Great Sasuke and Hayabusa. However this piece will not serve as an epitaph to an in-ring career. Many historians are much better placed to create an encyclopedic retrospective of the man than I. I simply want to capture what Liger was, and always will be to generations of fans. Jushin Thunder Liger is part of the very fabric of professional wrestling.

One need only look at the scope of the tributes that flooded social media over the course of Wrestle Kingdom weekend. Kevin Nash shared a photo of himself in his garish and mercifully short-lived guise as Oz, from Liger’s time in WCW. Britain’s masked mainstay Ligero, whose name should clue you in to his greatest influence, thanked Jushin for his advice alongside a picture of the pair. Kassius Ohno, independent scene legend turned trusted NXT veteran shared artwork and a picture of himself donning the iconic Liger mask. These are three examples amongst dozens. Former rivals, allies, and even upstarts who had been inspired by Jushin Liger came together to say goodbye to one of the all-time greats of professional wrestling.

The reasons for Liger’s significance are clear. He has spanned eras, countries and promotions. While primarily a New Japan ever-present, Liger’s career is incredible in its scope. His legacy extends to the World Of Sport-era of British wrestling, where under his real name of Fuji Yamada he squared off with the great Mark “Rollerball” Rocco. It took him to America, where his stunning WCW battles with Rey Mysterio and Brian Pillman re-defined aerial wrestling for a generation of fans. His brightly coloured body suits and distinctive horned mask made him a natural fit for Mexico, where he thrilled Lucha Libre audiences throughout his illustrious run. He even briefly surfaced under the WWE umbrella, granting NXT a one-off appearance when he faced Tyler Breeze in 2015. Most wrestlers don’t get to dictate terms to Vince McMahon’s corporate giant. But Liger is not most wrestlers, and the WWE social media accounts extended their well wishes for the retiring superstar over the weekend.

Jushin Thunder Liger is universal, and every wrestler and fan seems to have a story to tell about him. Your writer first saw him perform on WCW Worldwide on Channel 5. Immediately struck by his bright red and white attire, my young mind immediately equated him to a Power Ranger. And no disrespect to the “Red Ranger” I saw battling through a workmanlike match at a Haven holiday park around the same time, Liger was simply on a different level. The love affair with my masked hero intensified when I
happened upon an aging VHS copy of Superbrawl 2 at Milton Keynes market. A wrestling-hungry youth, I’d endlessly rewatch every new tape I added to my collection, but this particular cassette dominated the VCR for a month. The reason was of course Jushin Thunder Liger’s incredible battle with Brian Pillman. America’s finest aerialist meshed incredibly with Japan’s premier flier and the results were stunning. Beyond invigorating a new era of cruiserweight wrestling in the United States, the match also drew me deeper into my professional wrestling obsession. This colourful stranger from afar opened my eyes to a world beyond what I’d be shown by the Stateside companies, and would ultimately lead to me spending my entire adult life following Japanese wrestling.

Jushin Thunder Liger’s three-and-a-half decades in the wrestling business are defined by stories. The gripping tales he told in the ring, the awestruck recollections of those that worked with him, and the treasured memories he gave fans like me as he shooting star pressed his way into our hearts. Jushin Thunder Liger is a storyteller. Perhaps the greatest that professional wrestling ever had.