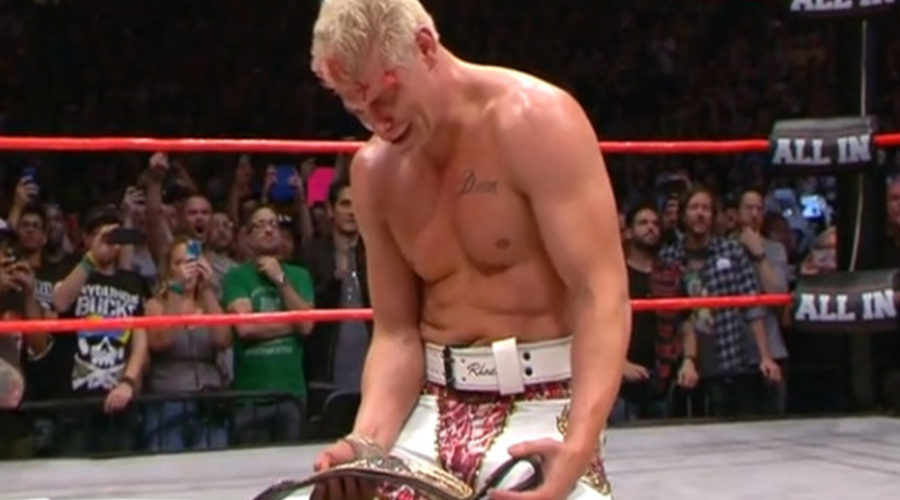 Next:
Kevin Nash joins For The Love Of Wrestling

Cody Runnels, better known as Cody Rhodes in World Wrestling Entertainment (WWE) or just Cody in New Japan Pro Wrestling (NJPW), Ring of Honor (ROH) or the independent circuit has had somewhat of an interesting career so far – especially since leaving WWE.

However, that’s not to say he was a failure in WWE, far from it.

The 33-year-old was a three-time World Tag Team Champion, a three-time WWE Tag Team Champion and a two-time
Intercontinental Champion. Cody has teamed with a handful of wrestlers during his tenure in WWE, he won the Tag Titles whilst teaming with Hardcore Holly, Ted DiBiase Jr, Drew McIntyre and his brother Goldust, whilst also forming a team with Damien Sandow between
2012 and 2013. He portrayed several gimmicks – most notably ‘Dashing’ Cody Rhodes and Stardust before leaving WWE in 2016.

Before debuting in in the WWE in 2007, Rhodes began his professional wrestling career with Ohio Valley Wrestling (OVW) in 2006.

He has won multiple titles for many different independent wrestling promotions.

The most significant achievement on the independent scene in Rhodes’ career thus far is All In. For those of you who don’t know, All In was an independent wrestling show produced by Cody and The Young Bucks (Matt and Nick Jackson). To produce an independent show alone is extremely impressive, but to do it on the scale that Cody and the Young Bucks did was on another level. This show was where Cody won the NWA Worlds Heavyweight Championship from Nick Aldis. Once capturing the title Cody and his late great father Dusty became the only son and father duo to hold the title.

2016 didn’t just see Cody appear on the independent scene, he also debuted in ROH and NJPW where he is an active member of both rosters, not just that but Rhodes had a brief stint in Impact Wrestling.

So far in ROH, Cody has won the ROH World Championship once, the ROH World Six-Man Tag Team Championship with the Young Bucks once and was named the ROH Wrestler of the Year in 2017. Whilst in NJPW, Rhodes is the current IWGP United States Champion.

Upon debuting in NJPW Cody became a member of the famous Bullet Club. He remained a member of that faction until October 24 2018, when alongside fellow members Adam Page and Marty Scurll joined The Young Bucks and Kenny Omega as new members of The Elite,
thus leaving the Bullet Club.

An impressive career thus far from a wrestler who I’m sure will have a massive 2019.