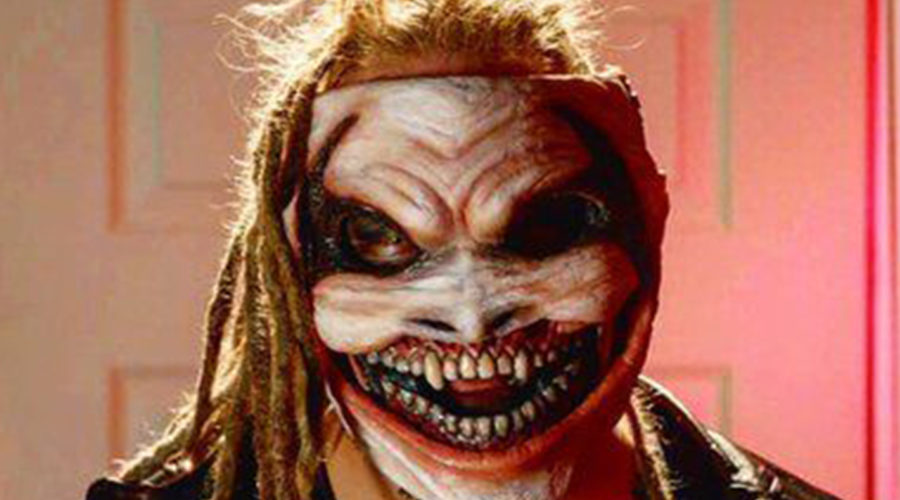 With Bray Wyatt debuting his new, fresh look on this past Monday ahead of his anticipated return to the WWE ring, the wrestling world was taken aback with his new image.

After he teased his return in the form of a children’s television styled character on Fiery Fun House, Monday saw Wyatt shock fans by unveiling his “dark side” persona in his promotional video.

Ahead of SmackDown’s London event earlier this week, Florida-born Wyatt got fanbase of WWE enticed after promising to show the audience “what he’d been working on,” since leaving the ring behind.

Having been building up, along with his supporting team of Fireflies, the image of his sweater-wearing presenter, Wyatt revealed his new, true identity.

And he did not disappoint, unveiling a killer clown mask, not too dissimilar to that of the Joker character in the horror films and comic books.

Wyatt, whose reputation in the ring had him portrayed as a bad-boy, took a hiatus from WWE in 2018, has announced his return in the only possible way that he knows.

Modern popular culture has had a major impact on how the wrestlers as characters showcase themselves both in and outside of the ring, manipulating trends in the outside world to increase their pulling power as professional performers.

Popular culture is a collection of trends, ideas, attitudes and beliefs associated with a current topic in time.

These consist of music, fashion, entertainment and sporting trends which could shape and create a medium for profit.

So, the question is, with the 31-year-old Wyatt freshening up his character to that of his former self, how has pop culture, its trends and its values changed the landscape of wrestling and in turn, how has wrestling influenced different areas of society and its reach in general?

Just look at Wyatt’s recent announcement video, which gives a clear indication of when pop culture collides with professional wrestling.

Set in the concept of a children’s television studio where he plays the role of an unassuming cheesy presenter gimmick, Wyatt played on the comic book and horror film vibe to scare his audience and get the WWE fans talking.

Professional wrestling has had a major impact on society since becoming mainstream in the 1980s when audiences were introduced to the sport via the medium of World Championship Wrestling, which captured the minds of millions of people around the globe.

Since 2001 however with the formation of the WWE franchise, professional wrestling has reached another level in terms of its popularity.

The creation of WWE and everything that has come with it has paved the way for new stars to grace the ring and make a lasting impact on society.

Merchandise has become a key selling point that has been distributed to millions of fans, including caps, t-shirts, replica belts, action figures along with other products.

From how they portray their characters to their values, entrance music choices and fashion decisions, wrestling stars have been able to shape the trends of a generation.

Social media and the arts also play a prominent role in how wrestling and pop culture collide, with many GIFs now featuring wrestling content, while Dwayne “The Rock” Johnson has forged himself an acting career in Hollywood whilst John Cena ventured into the music industry, releasing a hip-hop album.

The reach into mainstream popular culture has been enhanced by celebrities and people of high importance endorsing professional wrestling.

Even Donald Trump, before becoming President of the United States, made an appearance in the ring back in 2007.

And it was eventful, where he ended up shaving Vince McMahon’s hair off before receiving a stunner from Stone Cold Steve Austin.

Wrestling has influenced the way that other sports, particularly American football and basketball, where players often re-enact moves in their celebrations.

WWE remains one of the most popular franchise’s anywhere within sport and given its platform and importance that it brings to society and what changes it has made to the lives that we lead.