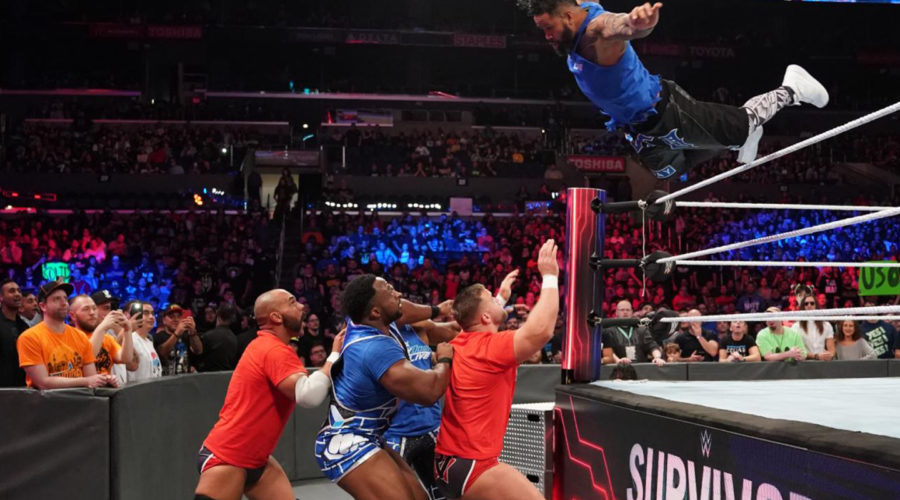 Team Raw (Bobby Roode and Chad Gable, The Revival, The B-Team, Lucha House Party, and The Ascension) vs. Team SmackDown (The Usos, The New Day, Sanity, Luke Gallows and Karl Anderson, and The Colóns)

Epico and Calisto start this one off. Epico hits a stalling vertical suplex on Calisto for a two count. Kalisto appears to be selling a knee injury. Lince Dorado tags in and dropkicks Epico now, then Calisto tags back in for the double team.

Epico comes back with a back suplex, then Primo tags in for a senton and a dropkick. Wilder tags in, and Dawson comes in with him and they hit the Shatter Machine on Epico for the three count. The Colons are now eliminated. Karl Anderson and Curtis Axel come in next and they trade blows in the corner.

Bo Dallas comes in for the double team on Anderson for a two count. A distraction from Gallows leads to Anderson rolling up Dallas for the three count, and The B Team is now eliminated. Gable and Big E are about to go at it next, but Killian Dain tags himself in and goes after Gable. He drops Gable, then Eric Young tags in for the double team. Dain gets dumped outside, then Roode and Gable hit a double team neckbreaker and moonsault for the three count – and Sanity is now eliminated. Big E comes in and looks for the Big Ending on Roode, but Konnor tags in and breaks it up.

Big E puts Konnor in the abdominal stretch and spanks him. Woods tags in and Konnor hits a fallaway slam on him. Viktor tags in and keeps Woods grounded with a side headlock. Big E tags in and hits the Big Ending on Viktor for the three count, and The Ascension is now eliminated. Gallows tags in and goes at it with Gran Metalik. Gallows goes for a chokeslam, but Metalik reverses into a stunner. Metalik dumps Anderson and Gallows outside, then he hits a moonsault in tandem with Lince Dorado. Metalik hits a Swanton Bomb on Anderson for the three count, and the Good Brothers are now eliminated. Jimmy Uso comes in now and beats on Metalik in the corner. Metalik comes back with a dropkick, then Dorado tags in and lays into Jimmy with chops to the chest. Dorado hits a springboard moonsault and then a hurricanrana on Jimmy.

Jey tags in for the double team on Dorado for the three count, and Lucha House Party is now eliminated. Dawson and Woods come in now, and Dawson drops him with an elbow to the face. Gable tags in for the double team on Woods. Dawson tags in to continue the offense on Woods. Woods connects with a boot to the face for a two count. Woods knocks everyone off the RAW corner apron, then he hits a missile dropkick on Dawson. Big E gets the tag and hits some overhead belly to belly suplexes on Wilder. Gable tags in blind and hits a t-bone suplex on Big E. Roode tags in, and Gable hits a German suplex on Big E into a neckbreaker from Roode for a two count. Roode looks for the DDT, but Big E fights out and tags in Woods. They double team Roode and pin, but Gable breaks it up.

Scott Dawson hits a suicide dive on The Usos at ringside, then Woods hits a dropkick through the ropes on Dawson. Wilder comes over and hits a tornado DDT on Woods on the floor. Big E then spears Wilder through the ropes to the floor, and Big E lands hard on his head. Roode then launches Gable out of the ring for a suicide dive on Team SmackDown at ringside. Roode goes for a dive, but Jey Uso runs in and superkicks Roode. Uso then hits suicide dive on Team RAW at ringside, but he ends up landing mostly on The New Day. Back in the ring, Gable and Jey fight on the top turnbuckle. Gable ends up German suplexing Jey off the top turnbuckle down onto the bodies on the ringside floor. Back in the ring, Gable and Roode look for the double team on Woods.

Woods fights them off and Big E tags in. Woods drops Roode, then The New Day double teams Gable with the Up Up Down Down for the three count. Gable an Roode are now eliminated. Big E suplexes Wilder, then Dawson hits a DDT on Big E. Woods comes in and goes for a DDT on Dawson but doesn’t connect. Wilder tags in and fights with Woods in the corner.

Woods fights off Wilder, then he goes flying off the top for a splash, but Wilder and Dawson catch Woods in the Shatter Machine for the three count. The New Day is now eliminated. It’s down to The Revival and The Usos. The Revival drops Jey, then they hit a Doomsday Device type double team move on Jimmy for a two count. Jimmy and Dawson fight on the turnbuckle, then Wilder tags in. Dawson superplexes Jimmy down, then Wilder immediately follows up with a splash off the top, but Jey breaks it up.

The Revival goes for the double team on Jimmy, but Jey superkicks Wilder own, and Jimmy superkicks Dawson. They hit a double superkick on Wilder, and then they hit it on Dawson. Jimmy follows up with the big splash off the top for the three count.