Getting to know the real Taya Valkyrie 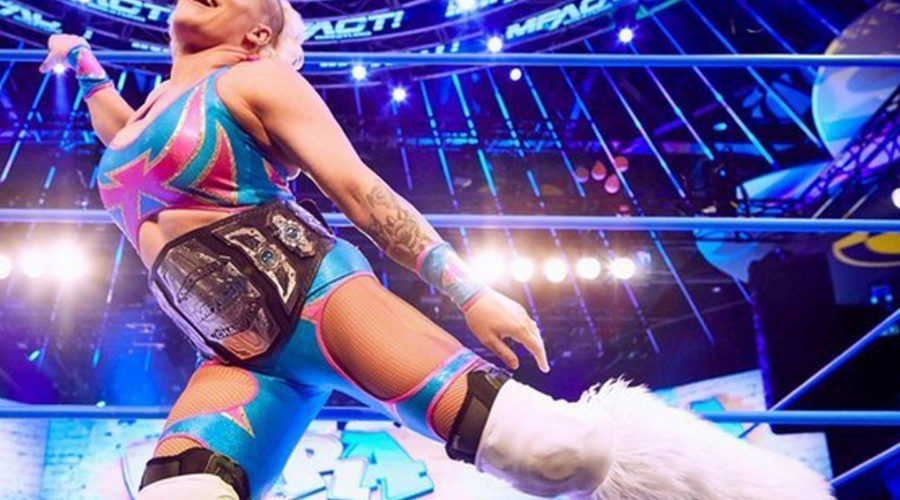 The 35-year-old, who hails from Victoria, British Colombia, has enjoyed an upward trajectory in her recent career, and since September 2017 she has competed under the Impact Wrestling banner.

Valkyrie, real name Kira Renee Forster, began her path to success in wrestling in 2010 with Lance Storm in her native Canada having previously embarked on ballet and gymnastics as a child.

She said: “I did ballet when I was growing up as a really young kid in Canada at about seven or eight years old.

“My parents did dance and gymnastics, I was very small growing up and my gymnastics teacher really wanted me to go every day, I picked ballet over gymnastics and I always wanted to be a performer and put on a show.

“I asked ‘how does someone become a Diva?’ so I looked at the people who I look up to those that inspire me and saw what they were doing.

“I looked to see what they did in and outside the ring in terms of their fitness.

“I wanted to become the Canadian National Champion and I tried to follower their path to get to where I wanted to be.

“Ironically after I won the Canadian National Championship and my first amateur title, that was also the first time at my trials, and I went there, and I was confident.”

After training under the guidance of Storm, Valkyrie was signed up by WWE in October 2011 on a development contract.

She later made her ring debut in the Lucha Libre AAA Worldwide on 3rd November 2012 where she competed in a six-person Tag-Team match.

Her experiences in the Central American country saw her compete in the Mexican professional wrestling environment for a further five-years in total.

Valkyrie expanded on her brief foray into WWE and her move into Mexican wrestling and how it shaped her both professionally and personally.

She added: “That was the first time that WWE contacted me for a trial, I hadn’t trained at that point, so I went there, and they said, “we love your look.”

“I went to Calgary to have a meeting with Lance Storm, the wrestling coach, so I started the three-month training, but he thought I could do really well as I came in and tried a few things and it went well.

“I’d been in a wrestling ring before but hadn’t met Lance and didn’t know the ropes and psychology of wrestling, but Lance goes through everything intricately, he is an excellent teacher and he makes sure that everyone is safe, and I would recommend him.

“After a year of wrestling for Lance, it was amazing when they (WWE) first offered me the actual contract after they did my background check and medical records but then after a year, they phoned me up and told me that I wasn’t needed anymore, and I was devastated.

“My whole life was completely shattered because of what was happening so I was determined to go somewhere and to make something of myself and also, my pride was bruised so I was in contact with Konnan, through Teddy Hart and I had met them during my time on the circuit and they said ‘why don’t you come down to Mexico and train for a couple of weeks?’ and I was fully determined to go and make it work.

“You have to be really careful that you are with the right teacher and Lance Storm is the best.

“Throughout my career, whether it be Lance or other people, people have always given me words of advice and inspired me and put me in my place and if you want it enough you will get it, I just always remember those people who were my teachers giving me the advice and keeping me focused which I am really grateful to them for launching my career.”

Valkyrie also owes the world of professional wrestling for meeting her husband, John Morrison, who also competes for Impact Wrestling.

The couple have been in a relationship since 2016 and were married in June 2018.

She added: “Wresting has allowed me to make so many great experiences, I met my husband through what I do.”