Kross And Scarlett Debut On NXT 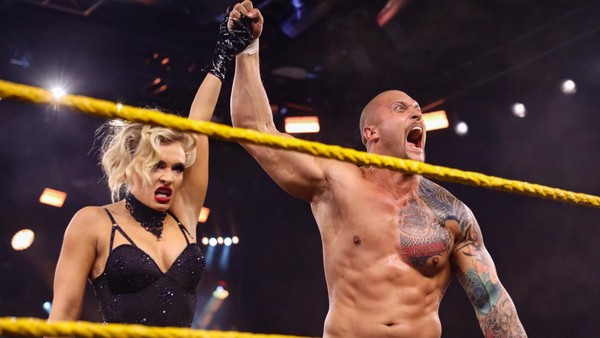 Karrion Kross (formerly Killer Kross) and Scarlett finally made their official debuts last night on this week’s edition of NXT.

After a spectacular entrance which you can watch below, Kross defeated EVOLVE talent, Leon Ruff, with the Doomsday Saito suplex to pick up an easy win.

It has been widely reported that WWE his extremely high on Kross, and with his first appearance last night in an NXT ring, this is just the beginning for the highly talented wrestler, who will retain his real-life girlfriend, Scarlett, by his side.

Scarlett initially signed for the WWE back in November 2019, where Kross only joined the company early this year, but both are already making a name for themselves and are the talk of the wrestling world after their appearance last night.

Kross and Scarlett have worked for promotions such as IMPACT Wrestling, prior to working for WWE, so already have experience on the big screen, but it was clear during their tenures in IMPACT that they were destined for big things.

You can catch Kross & Scarlett every Wednesday night on NXT. We certainly can’t wait to see what’s in store for Kross and Scarlett in the future!