IMPACT ‘United We Stand’ to air LIVE on FITE.tv 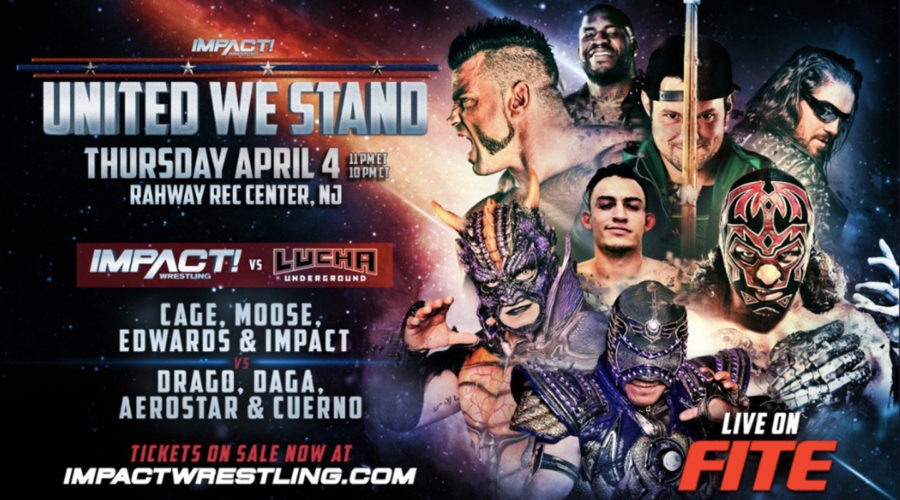 TORONTO | NEW YORK – IMPACT Wrestling announced today that United We Stand on April 4 in Rahway, NJ will air as a live pay-per-view event exclusively on FITE.tv.

“We are delighted to welcome two legends in Rob Van Dam and Sabu back to an IMPACT Wrestling ring,” said Ed Nordholm, president of IMPACT Wrestling. “Add this to the list of other matches we have announced and United We Stand is becoming a dream night of action for wrestling fans all over the world made available through our partners at FITE.tv.”

United We Stand will also present a Monster’s Ball to end all Monster’s Balls between two of the most intense, violent and hardcore wrestlers on the planet. Picking up where they left off after their barbed wire bat death match at Wrestling MediaCon last September in Manchester, Sami Callihan and Jimmy Havoc will battle in a dream hardcore encounter for the world to see.

In other featured matches:

Tickets for United We Stand start at $40 and are available at IMPACTWrestling.com. The live pay-per-view event can be purchased on the FITE website www.FITE.tv or on the FITE app on all iOS and Android devices, or on Roku, Apple TV, Android TV and FireTV boxes for $19.99 on a stand-alone basis or for $159.95 as part of FITE.tv’s “FITE FEST” bundle of more than 30 events occurring through the April 3-6 weekend of wrestling festivities in the tri-state area. FITE.tv is a premium digital live streaming network that has presented over 1,900 live professional wrestling, mixed martial arts, boxing and other combat sports events since its launch in 2016. For more information about United We Stand on FITE.tv, visit www.FITE.tv.

A subsidiary of Anthem Sports & Entertainment Corp., IMPACT Wrestling will present United We Stand in collaboration with WrestlePro. Emanating from Rahway Recreation Center, the show will take place on the busiest wrestling weekend of the year, as virtually the entire professional wrestling world descends upon the New York metropolitan area.

IMPACT Wrestling previously announced a collaboration with MLW for their respective events on April 4, coordinating schedules to ensure fans can attend both shows.

Directions from Melrose Ballroom, which hosts MLW’s television tapings, to Rahway Recreation Center can be found below:

By Transit or Subway

Both routes will bring you to NJ Turnpike South to Rahway, NJ.

About IMPACT Wrestling
IMPACT Wrestling is one of the world’s largest wrestling entertainment properties, creating more than 300 hours of original content annually across television and other digital platforms. IMPACT Wrestling specializes in creating premium content, events, products, merchandise and music, as well as the management and promotion of professional wrestlers. Its highly successful flagship, IMPACT!, is broadcast globally, including Fridays at 10 p.m. ET/PT on Pursuit Channel and Twitch in the United States, Fight Network and GameTV in Canada, Sony ESPN in India, 5Spike and Fight Network in the United Kingdom, SuperSport in Africa, and MVStv in Mexico.