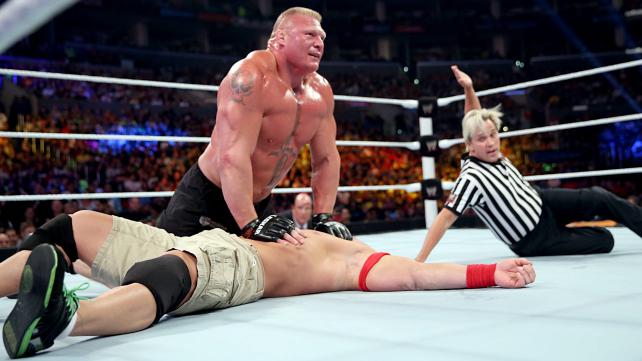 Four months prior to SummerSlam 2014, Brock Lesnar scored the most newsworthy victory in WrestleMania history, when he turned The Undertaker’s 21-0 into 21-1. Yet handing The Deadman his first ever L at the Grandaddy of ’em All was not The Beast’s most impressive performance of that calendar year.

The pair had already infamously faced off just over two years previously, in Lesnar’s first match back with the company following an eight year hiatus. Cena emerged victorious from an absolute banger of a main event at Extreme Rules, in a match that almost saw Lesnar immediately quit the company after only just re-signing, apparently furious over the Doctor of Thuganomics’ refusal to be stretchered out post-match, as was initially the plan.

However, a couple of years later Brock Lesnar vs John Cena Part Deux (Electric Boogaloo) would make Lesnar a lot happier. And the pair didn’t fail to deliver.

Before a German Suplex has been thrown, you could sense Brock Lesnar vs John Cena at SummerSlam 2014 was going to live long in the memory. Cena’s music hadn’t even hit and there stood Brock, in the middle of his ring, looking like someone built a skyscraper out of tanks, Paul Heyman grinning like the most nefarious Cheshire Cat, clearly wise to the historic beating his client was about to inflict upon the World Champion.

Lesnar himself peers towards the entrance way. Unflinching, emotionless. When the Minnesota native had last been in the WWE Title picture, John Cena wasn’t much more than a transitional challenger, vanquished without much ceremony at Backlash 2003. Eleven years later and West Newbury’s favourite son had conquered the world several times over and isn’t far removed from beginning his own part time run. The Chain Gang leader’s music hits and Brock’s reaction doesn’t alter. He doesn’t give a single, solitary toss about what Cena has achieved in his time away from the company. Lesnar only cares about ripping the World Title belts from around Cena’s neck, along with Cena’s head at the same time.

Big Match John, for his part, is noticeably subdued during his entrance. There’s no hurried sprint to the ring, no hollering to the camera or the crowd. Just a solemn unveiling of a ‘Never Give Up’ banner and a march into war.

And within 30 seconds of the bell sounding, the war is both almost over and only just beginning.

No sooner does Cena charge Lesnar than he finds himself being pummelled right onto The Beast’s shoulders, where he is promptly F5’d to the canvas for a rapid near fall.

The crowd are MOLTEN at this point. Those opposite the hard cam are on their feet. Lesnar’s already decimated the World Champion in less than half a minute, where else is this madness going to go?

The answer is: Straight to Suplex City. Bitch.

Crowd noise not subsiding, Cena sells his arse off for Lesnar’s volatile offence, which looks as realistic as anything you’ll ever see inside a wrestling ring, with the ref asking Cena if he wants to call for the bell within the opening few minutes, such is the beating the Ruthless Aggression poster boy is taking. The Beast throws the champ around like a rag doll. Cena wouldn’t have been able to sandbag Lesnar even if he’d wanted to. Each suplex notches a few extra degrees of ferocity as Cena bounces off the ring mat.

The parallels between this match and classics between Vader and Ric Flair/Sting are there for all to see. Cena valiantly makes the occasional comeback, but even when he manages to drop the heavy artillery on Brock, it has little to no effect. A desperation Attitude Adjustment barely slows Lesnar down as the champ tries to claw his way back into the bout. Cena’s entire tactic is to survive. Hit and run and surprise the big man, just like Naitch and the Stinger would do to Big Van in the early ’90s.

Only this time round, there is no heroic comeback. No five moves of doom to secure victory. Instead, it’s a relentless procession for Lesnar towards championship gold as he simply batters Cena into the mat as if he’s little more than a glorified enhancement talent and not, y’know, a 15 time World Champion at this point.

Seven years later and this battle remains the blueprint for what a classic main event should be. Lesnar repeated the trick against Roman Reigns eight months later at WrestleMania 31, with very similar results (albeit Seth Rollins ensuring the actual result wasn’t quite the same). Physicality upon physicality upon emotion, vulnerability, anger and desperation. The sense that, if you’re lucky, at some point, you might survive just long enough to score some offence that actually slows Lesnar down or inflicts lasting damage on him. So take that chance when you get it. Go for broke, because your window is literally a handful of seconds before the anvil comes crashing right back down on you to break your body and soul.

For WWE to sign off on such a squash match to not only take place at one of their biggest shows of the year but at the expense of one of their biggest stars of all time speaks volumes of how much they trusted both Cena and Lesnar, here. Management knew the pair could deliver something truly compelling and believable that wouldn’t hurt Cena one iota but would also add even more aura to Lesnar and his streak breaking dominance.

This match will continue to stand the test of time and it will take something truly special to usurp it as the greatest ever SummerSlam main event. No pressure John and Roman.