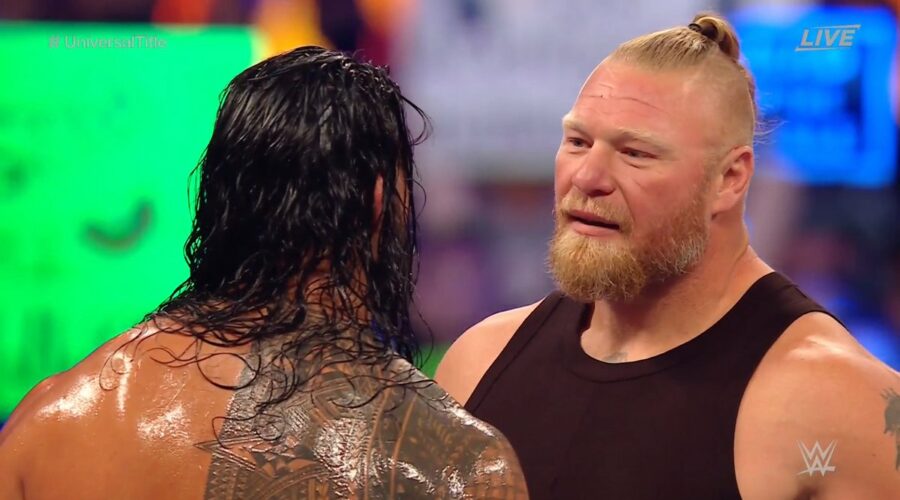 Big E pinned Baron Corbin and took back his Money In The Bank briefcase on the pre-show.

RKBRO defeated AJ Styles and Omos to capture the Raw Tag Team Titles in the opening match of the main card. Orton hit Styles with the RKO for the victory.

Alexa Bliss pinned Eva Marie in quick fashion. Following the loss, Eva Marie was announced as the loser by Doudrop, who promptly turned on the former Total Divas star, mimicking her and walking away in her robe.

Damian Priest became the new United States Champion after scoring a pinball victory over Sheamus in a hard hitting bout. The crowd at Allegiant Stadium in Las Vegas gave Priest a great ovation after he won.

The Usos retained their SmackDown Tag Team titles over Rey and Dominik Mysterio after Rey took a double super kick and a frogsplash, with Dominik downed outside the ring, unable to break up the pin.

Becky Lynch made a shocking return to become the new SmackDown Women’s Champion. Before the advertised Bianca Belair vs Sasha Banks match could begin, it was announced that Banks could not compete. Carmella was originally introduced as her replacement, although before the bell rang, Lynch’s music hit to a thunderous reception from the Allegiant Stadium crowd. Lynch took out Carmella and challenged Belair instead. Belair accepted, but got caught within 26 seconds and Lynch was the new champion.

Edge defeated Seth Rollins via submission with a crossface style choke. Edge came out to the original Brood entrance, which received a massive pop.

Bobby Lashley retained the WWE Title against Goldberg via ref stoppage when Goldberg was unable to continue due to an injured knee. Lashley followed up his win by attacking Goldberg’s knee with a steel chair. Goldberg’s son Gage then ran into make the save but Lashley put him in the Hurt Lock until he passed out. This looks to be setting up a rematch at Extreme Rules next month.

Roman Reigns successfully defended the Universal Title against John Cena after three Superman punches and a spear. After the match, Brock Lesnar returned to a gigantic reaction and stared down Reigns, who backed off and walked back down the ramp as the show went off the air.