A Night With Naitch 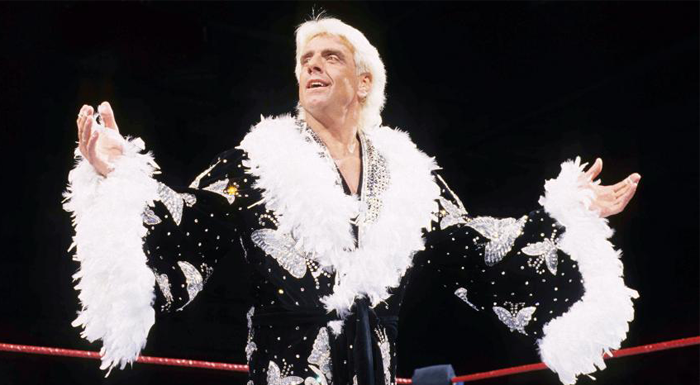 “Laura, this is the one and only Nature Boy Ric Flair…

It’s not often that an interview concludes with the interviewee leaving a voicemail on your wife’s phone, informing her that you won’t be coming home. Then again, most interviewees have not legitimately survived both a plane crash and a lightning strike. Most interviewees are not Ric Flair.

A little under four years ago I was asked if I would like to spend my afternoon being filmed talking video games with Finn Balor, as a way to promote the latest instalment in the WWE 2K games franchise. Given that I was already a fan of Balor’s and knew him to be an exceptionally good interview, I barely hesitated to accept the opportunity to get out of the office for three hours on a Tuesday afternoon.

Unfortunately, a couple of weeks later I was informed that, as is so often the case in the wrestling business, plans had changed. Balor had suffered a labrum tear of his shoulder and was set for surgery and eight months of rehabilitation. My Tuesday afternoon was to be spent needlessly inserting pro-wrestling references into clickbait articles for my own amusement. Fair enough.

Another swerve was on the horizon, however. A colleague in London dropped an email into my inbox late on Friday afternoon which simply read, “2K have Ric Flair available if you fancy that instead?”

It took all my strength not to stagger out of my chair a half dozen steps and face flop clean onto the office floor.

The intervening three days were an excruciating blend of wide eyed hysteria and crippling anxiety. My stomach lurched incessantly as though someone had funneled a kilo of Mentos and Diet Coke down my gullet. I watched and rewatched Flair’s greatest hits on Youtube and the WWE Network; the Steamboat Trilogy, making Sting in 45 minutes at Clash Of Champions, making Terry Funk howl ‘I Quit’, running with the Horsemen, the ’92 Royal Rumble, his retirement match with Shawn Michaels and, of course, pretty much any promo he cut in his entire career.

A 15 minute junket shot may as well have been an hour long broadway in the main event of WrestleMania. For many, Flair is the greatest to ever lace up a pair of boots inside the squared circle. An industry lifer who grew up with pipe dreams of becoming ‘Ramblin’ Ricky Rhodes’, a pseudonym referencing his idol ‘American Dream’ Dusty Rhodes, who would go onto feud with and surpass his hero (though his worship of Rhodes would never allow him to admit doing so), become a two time Hall of Famer, 16 (21) time World Champion and, bizarrely, Offset’s best mate.

So how in the fuck was I supposed to talk to The Man about a video game for quarter of an hour?

That Tuesday afternoon, with the September sun causing me to sweat through my ludicrously creased white shirt, I awaited the Nature Boy in a suite in Manchester’s Gotham Hotel. The decadence of the location a suitable setting for a man who once boasted that his custom made alligator shoes cost more than an opponent’s house.

The throng of colleagues, cameramen and PRs gathered in the room awaited Flair’s entrance with an anticipation akin to a crowd in ’80s Charlotte, North Carolina when ‘Naitch’ was touring the United States as the National Wrestling Alliance’s World Champion. No one knew what to expect. It was five pm at the end of an arduous day of answering the same questions in the same overcrowded, needlessly dark hotel room. At 67 years of age, you could have forgiven Flair for throwing in a “alright let’s get this over with” before retiring to his quarters for the evening with some room service.

Instead, he strolled in looking every inch the custom fitted champion he had portrayed for over 30 years. Hand shakes all round like he was walking the aisle at the Omni in Atlanta or the Kiel Auditorium in St. Louis. Everyone got one before me, as I waited and anticipated and fucking sweated (so much sweat).

I gripped his hand like I was about to whip him into the turnbuckles. The fuck was I thinking? A firm handshake is hardly going to impress a bloke who literally fought with Andre The Giant.

Oh great, the second thing I’ve got to say to one of my all time heroes is that he misheard my name. Or rather, he heard it incorrectly because I delivered my greeting with all the conviction of a shit scared 16-year-old trying to buy a girl a drink at a Sixth Form party.

Right, 15 minutes, let’s get the video game questions out the way first, keep the PRs happy and then onto the World Title victories, the stories from the road with the Four Horsemen, Dusty, Vince, Triple H, working the territories and everything in between before our time is up.

“…Oh I don’t know anything about the game. Never played ’em. Do you really think the Nature Boy ever played video games in his spare time?”

A valid question, really. And one that ensured I had extra time to discuss Flair’s absurdly decorated and chequered history.

Flair gave us an hour.

Given that this is a man who made his name putting on 60 minute time limit clinics across the United States for almost two decades, it came as no surprise that once the Nature Boy started, he couldn’t stop.

As the bell sounded halfway through a tale about misadventures in Singapore, the team handling Flair for his trip were on fumes, punch drunk on stories of Spring Breaks with Kevin Sullivan, which Hall of Famers can hold the most Jaeger and a night in a Baltimore hotel as ‘the Black Scorpion’.

And, like all legendary performers, Flair was ready for an encore.

“Where we going tonight?” he shot at me. Flustered at the role reversal and the prospect of an actual night on the tiles with a man who once spent $40,000 in 10 minutes on fur coats for him and his wife in a Las Vegas airport, I stammered over my words before Flair interjected once again.

“That your wife?” he motioned towards my mobile phone screensaver. “Want me to call her?”

The voicemail the actual Ric Flair left is still on my wife’s phone. I watch the video of him delivering it at least once a month and still wonder what the fuck is going on. The delivery is second nature, like autopilot he drops a promo down the phone to my wife as if he were selling an upcoming pay-per-view, informing her that I’ll be staying a little longer at the Gotham Hotel.

I’ll admit, a substantial sized part of me was terrified. I’m knackered after four pints and now RIC FLAIR is telling my wife not to wait up? I couldn’t decide whether I needed the drink or someone to give me a massive hug. The hangover kicked in about 30 seconds after the phonecall ended.

Our team headed directly for the Gotham’s rooftop bar. Given that we had a company card and this was an establishment none of us could afford a drink in between us, it was the only logical conclusion to the afternoon.

The card never touched the machine once. From across the room a “what are you all having?” came and suddenly we were on the Nature Boy’s tab.

As everyone else knocked back their gin and tonics and headed for their Ubers to Picadilly station, the 16 time champion of the World pulled the stool next to him round and, in a scene that should have been accompanied by a volcanic ash cloud of cigarette smoke and a warbling jukebox dying on it’s arse in the corner, dropped a “sit down, kid” on me. Bloody hell.

As it happens, the interview was the curtain jerker, the opening match, the warm up. We were now entrenched in the main event.

For close to three hours, with barely any prompting, the Greatest Of All Time regaled me with tales from the territories, waxing lyrical about his love of the late, great Dusty Rhodes (every story ended with a pause followed by a poignant“Dusty, man…”), who his favourite opponent was (Ricky Steamboat), the best territory to work (Florida, where Flair “defended the belt in the ring in the evening and in the hotel room at night”) and countless other yarns involving Michael Hayes, Mick Foley, the McMahons, Triple H, Randy Orton and Dave Batista.

During this time, a constant flowing stream of lager and tequila was making it’s way into my hands, as Flair’s Hall of Fame ring saddled hand crashed down onto my shoulders and back time and time again. In my head, this was a secret induction to become the fifth Horseman and any moment now Tully Blanchard, Arn Anderson, Barry Windham and JJ Dillon were going to appear with a personalised jacket for me and a one way ticket to Atlanta to take out the Road Warriors and Lex Luger.

In reality, it was The Nature Boy showing a fan a good time, just like he had done for my last 20+ years following professional wrestling. Only with more hard alcohol and stories of debauchery I couldn’t even commit to print with a gun to my head.

Around nine pm, Flair called it a night, looking significantly fresher than me as I struggled to put one foot before the other getting out of my stool to say goodbye and thank you. Somehow, 40 years my senior, he looked like he could have dusted off the boots and stepped back into the ring, whereas I was wondering if I needed to find a corner for an emergency nap before meeting my mates at the Wetherspoons in Piccadilly Gardens.

The next morning, Flair would be on a flight back to Atlanta. I would be ringing up Hula Bar to see if they had my bag, laptop and coat.

In or out of the ring, no one has ever been able to keep up with The Nature Boy and on today, his 71st birthday, it felt like an apt time to remember how there’ll never be another like him.